so aside from being wildly unstable, i have noticed a few patterns. the tricky bit is that the patterns don't normally remain stable.

barring moods that are connected to actual life events, most people without a mood disorder have fluctuations that look kind of like this.

the amplitude of the wave isn't very great, nor is the frequency. just in case you're not familiar with the anatomy of a wave, the amplitude of it is the height of the wave and the frequency describes how often the waves occur. the peak is the highest point on the wave, the trough is the lowest point, and the node is the place (twice in a full cycle for this kind of wave) where it crosses center.

the problem for people with manic-depression is that the waves have too great an amplitude, and often too great a frequency. when you have full cycles more than three times a year, they call it rapid cycling. a year might be represented this way:

the problem for me is that i have a very extreme form of the illness, and my year looks more like this:

let me break it down for you.

a while ago i noticed that i was hitting a trough on average every 27 hours. that's hard to cope with, because although you can predict when it's going to happen, it's kind of like a rolling blackout and it makes it just that much more difficult to keep any kind of regular schedule to my day. a three day period looks kind of like this: 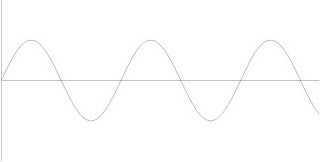 but then i was noticing that i was peaking 4 to 6 hours before the troughs, which would yield a wave-shape like this: 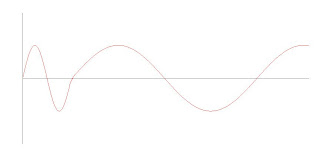 and that just doesn't make sense. 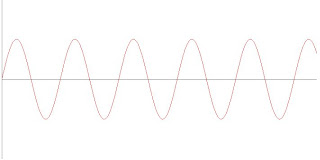 when i matched this wave frequency with what i was experiencing, it fit a lot better. i'm still uncomfortable, but it helps to know why and to be able to predict the swings.

so i'm making a full cycle on average once every 13.5 hours. i sleep for nine hours, which is partly a function of my body clock, and partly a function of my medication. when i am at either extreme of amplitude, it is difficult to fall asleep and when i am at a trough it's very difficult to get out of bed. further complicate the whole thing with hormonal cycles and it's just one big clustertangle.
Posted by flask at 10:58 No comments: