last year i tried to go to the HERE BE DRAGONFLIES program at little river state park, but i wasn't reading a current schedule, so i missed it and instead turned up for demystifying mushrooms, which wasn't such a bad thing because i also like mushrooms.

this past saturday i went up to get the HERE BE DRAGONFLIES program, and although we didn't catch much, i did learn some things. i learned how to properly use a bug net, and i learned what some of the better field guides are.

plus brian is always interesting. 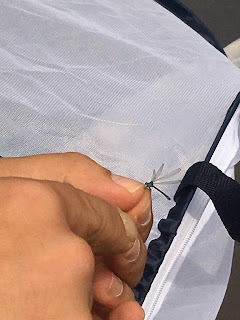 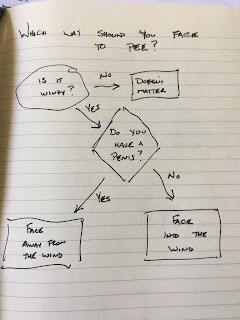 recently the CDC picked me for their random health survey.

first question out of the gate: are you male, female, or transgender?

whoops, sorry. not going to answer that one. if the question had been "what's your gender?" i'd have answered it, because you can answer that question with any description of your gender you like. most people are STILL going to say male or female, but it doesn't force nonbinary folk into choosing the least uncomfortable box to wedge themselves into.

the nice lady explained to me WHY i have to answer that question, which boils down to many of the questions are gender specific.

and i said thanks. i understand that, but i don't support survey forms that force people into those three categories.

and she explained it again, and asked me the question again.

and i said yes, i understand, but i am not going to answer that question.

and she responded that she had no other choice but to conclude the interview.

and then called me "miss", which i think is kind of a breach of manners since i had chosen not to answer the gender question.

if you simply ask me my gender, i say female.

if you give me a multiple choice where people who are nonbinary are not free to say whatever they want, i will decline to answer.

statistically, there are going to be so many people who identify as either male or female that unless we all get involved and decide not to "other" our nonbinary friends, nothing's going to change for them.

often i do not have the audience for whom to create a scavenger hunt.

but this summer since i was working at the Scout Camp, when we needed one for a friday all-camp activity,  i was ALL OVER that puppy.

the challenge was making it hard enough to be fun, but easy enough so that the littlest of our girls could succeed. philosophically, Girl Scouts are more about discovery and cooperation than we are about competition against each other, so our goal was to have every group be able to complete the hunt.


Something rough
Two brown things
Something squishy
Something that crinkles


A pine cone
A toothed leaf
A round rock
Two different kinds of leaves
A white flower
Birch bark (found on the ground!)


Three pieces of litter
A piece of tinder


Everyone on your team jumps off the ground at the same time.

2018 venture vermont: go kayaking on a lake or pond

here's me kayaking on lake champlain: 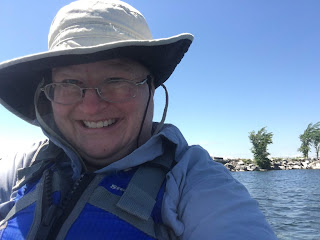 i paddled from the sandbar fishing access to the bike ferry and down to the railroad bridge and back. 12 miles.

this is me on waterbury reservoir: 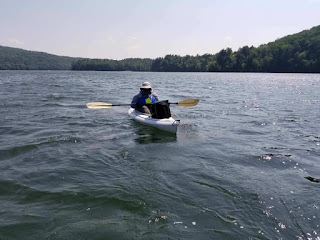 because i have been out in the sun every day at this point, protecting myself from sunburn requires hat, gloves, and a bandana OVER MY FACE even though i'm just going out for ice.

makes me look BAD, though.

yesterday i showed you the hiking stick i made for badPanda.

here are some little dudes i carved as practice faces.

the fun thing about this is that i carved them on sticks and left them hiding in trees all around a campsite on the res. 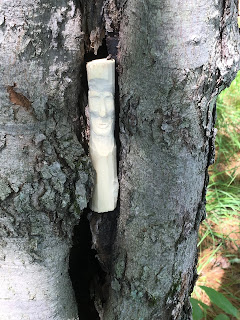 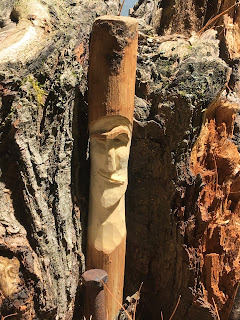 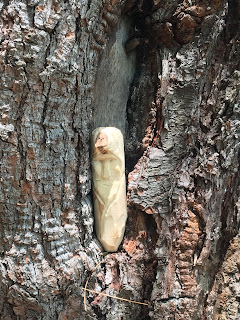 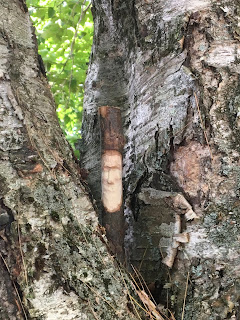 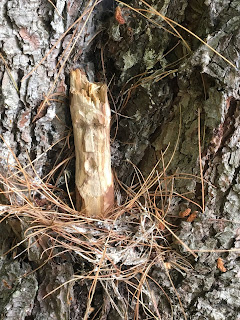 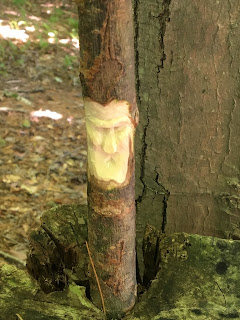 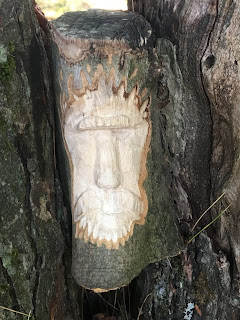 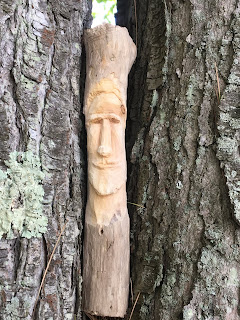 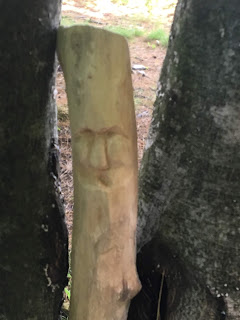 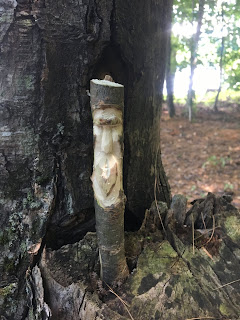 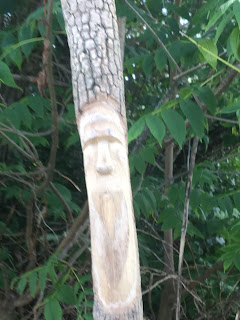 last year "decorate your own hiking stick" was on the challenge and that's when i took up carving hiking sticks.

recently my friend TheBadPanda aksed for a hiking stick, so i carved one for him.

this is the face part.
Posted by flask at 19:26 No comments:

i'll see your two hours and raise you.

ok, so i have a girl scout troop. that puts me over two hours on a monthly basis. but then i volunteered to go to camp farnsworth to help instruct skills week, so add a lot of hours on top of that.

and then i left there to go directly to my scout troop's end-of-year camping trip (our first two night trip ever!) and then i had to go out onto the res to hold a site for a camp trip.

when i got home from that, i went up to the local girl scout day camp to have a meeting with the assistant director of outdoor program to debrief the trip and somehow accidentally stayed to work as a volunteer for the ENTIRE FOUR WEEKS camp was in session.

there are no photos of me doing any of that (because policy), but i can supply a reference from the girl scouts of the green and white mountains upon request.
Posted by flask at 06:00 No comments:

check out this interview. go ahead, i'll wait.

they actually make it sound like this "dumb watch" is a device that will make your life better.

what does it do, you ask? well, it sits on your wrist and reminds you not to look at your phone so much.

it does not even tell time.

and these two men talk about the dumbwatch as if $275 is a reasonable amount of money to spend for a bracelet that reminds you not to check your phone so much, because of course people with money to burn don't understand how to turn their phones off or put them away for a while.

it's not that hard, people. you just, uh, don't look at your phone.

2018 venture vermont: sign up for inaturalist and use it to find five species new to you

last year they had us sign up for a thing that was way less useful. i mean it was pretty, but it was more like suggestions of places to go rather than a comprehensive usable trove of information you might be looking for.

this year i am all over this new thing, inaturalist.

i am all over this thing. not only can you use it to identify species new to you, but you can use it for citizen science reporting and you can use it to help other people learn species you know.

i am experimenting with using it to create a field guide.

it also manages your lists.

i am learning so much.

and getting that "research-grade" banner on one of your observations is like crack. i spend hours there.

i am way over five species new to me, but here are some of my favorites:

seriously. i'd never seen a black swallowtail before.

so since i was accidentally working at the girl scout day camp, i thought it would be cool to become certified as an archery instructor.

a level one archery instructor doesn't have to be a pro archer; they just have to know how to set up a range, give the safety commands, and teach beginning archers how to hold a bow, load an arrow, and fire.

i feel i should actually take range practice so i can become a competent archer, so yesterday since i was in the neighborhood i stopped by the range and shot seventy arrows or so.

i only thwanged my arm with the bowstring once this time, which is an improvement, and also i remembered to SHUT MY DOMINANT EYE before shooting, which improves my aim a lot.

ordinarily one wold not shut one's dominant eye, but i am right handed and left eye dominant, so there was an issue with aiming. i was progressing, but slowly.

then i decided to try closing my dominant eye, and THWACK. arrow after arrow goes into the target, if not the bullseye.

that is a very satisfying sound.

i shot until my aim started falling off due to fatigue and then cleaned up the range and went home. 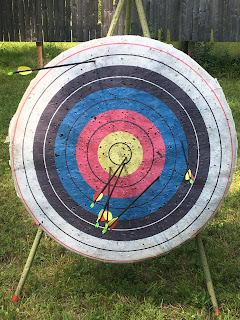 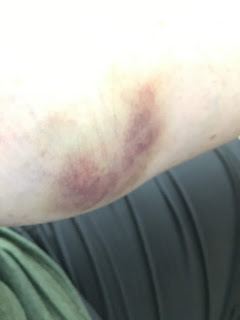 camp is over. i'm going camping.

holy honk, that was an intense four weeks.

today i sept until nine, rolled out of bed and spent a while finding clothes to wear.

i am going to need to play  the let's-pretend-an-adult-lives-here game and maybe pick up after myself, becuase even just picking up my own trash would be a big improvement.

pretty much for four weeks i have been waking up, throwing on clothes, coming home, showering, and getting into bed.

dirty laundry? on the floor where i took it off.
dirty dishes? on a flat surface near where i ate the food.
trash? wherever it happens to be.