i am still here. i spend a lot of time typing and stuff, which is what mb is now calling "sandersing".

it is so cool, and the thing that kills me is that i can't tell you most of it. wow, we have cool tools.

some are custom-made, but some are right off the shelf. the bottom line is that thousands and thousands of us can organize our efforts and keep each other company.

and the campaign guy is right. we do have good tools and we are tech savvy. we are also true believers. we have passion and we have love.
Posted by flask at 18:32 No comments:

we say this vehicle outside of city hall. 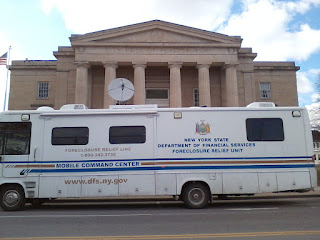 the simple fact that such a vehicle exists is proof that our economy has so much failed us. our government has sold us out to banks and left us out to dry.

we need better. we deserve better.
Posted by flask at 11:06 1 comment:

open letter to the registrars of ridgefield, CT

it's not important whose campaign i'm volunteering for.  my task today (and some other days) is to comb websites and talk to town clerks and registrars to verify current polling places.

i've seen a lot of town and county websites these days.

you guys win my prize for today. out of the dozens of connecticut towns i looked up today, you have the clearest and most accessible information about state voting laws and requirements, and the best and clearest information about how to locally access the necessary forms.

in some towns they seem to treat elections like a secret club.

i believe in good governance, and in free and fair elections, with information for all people who wish to exercise their franchise whether they are established voters, new to town or new to voting.

it's important not just at a local level, but as part of our national integrity.

so thanks. i'm just one middle aged lady from another state, but i appreciate your website and your work.

i hope voting in your town goes smoothly. may you have high turnout and few challenges, full ballot boxes, short voting lines, and sound sleep.

(my name)
west bolton, vermont
Posted by flask at 12:24 No comments:

if you support secretary clinton because you like wall street banks, or because you like the TPP, or the keystone XL pipeline, or you really, really like wall street banks, fine. you like this candidate.
but if you are spouting the nonsense that she is the only democratic candidate who gets things done, let’s look at her actual record, shall we? i think this is important because the clinton campaign makes it a point to say that senator sanders will be ineffective and that secretary clinton is the only one of the two of them who can DO THE WORK.
so, on sponsored bills that passed, we have clinton: S.3145, S.3163, and S.1241. that’s a renamed highway, a renamed post office, and the establishment of a historic site.
sanders has also sponsored three bills that were made law, H.R.4255,  S.855, andS.893. that’s two renamed post offices and the Veterans' Compensation Cost-of-Living Adjustment Act of 2013.
we could maybe also look at the number of bills that each candidate ushered through committees to become law, or the number of amendments to bills that each one passed. clinton was never chair of any committees so maybe she MIGHT have helped bills get through there if she’d had enough experience, but when she makes herself out to be the only one with experience and ability to get things passed, sanders leads there, too.
clinton: 74       sanders: 203
you can talk all you want about how ineffective sanders will be, but maybe you should check out his record.
remember: just because hillary says it doesn’t make it true.
Posted by flask at 19:26 No comments: