ok, so conservation is kind of my gig.

and i am seeing a LOT of posts these days about ramps and the harvesting of ramps, and why not? ramps are not just trendy; they are delicious. i harvest them to use and to share. they are one of the best things about spring.

but this is important: when you harvest them, please treat them like a precious and fragile resource. they are renewable, but they're very slow. their deliciousness and their slowness to reproduce mean that they are on the decline across the entirety of their range.

they can be cultivated, but the slowness of their growth and the terrain on which they like to grow make them a bad match for most gardeners.

but flask,  i hear you say, how slow can they be??

ramps can divide and form new bulbs, but they require at least seven years of root growth before they can do it. mostly they grow from seed, and it takes about seven years for a plant grown from seed to come to maturity and start reproducing.

so imagine you've just come across a hillside and there are a couple thousand plants, so you pull up a hundred.

and then someone comes along next week and pulls up another hundred. unless you're way out in the nowheres, it's very likely that five to ten people will come by and each will take some. so it's not unreasonable to think that a quarter of them will be taken. last year i watched, unable to do anything, as a young man took fully a third of a hillside.

i'm sure he thought he was harvesting responsibly. he spread out his harvest and only took a third of the patch.

but he wasn't the only one to harvest that patch last season.

now add the losses up over three or four seasons. if a seventh of a patch gets taken each season, total, by all the harvesters, that patch is maybe breaking even. it's probably in decline. add it up over multiple seasons and what you have is the extinction of that patch. add it up over the whole of the appalachians northward into ontario and what you have is a native species circling the drain.

there's good news: a ramp plant that is healthy and mature and has three leaves can give up one leaf every season and still live to go about its rampy business. the leaves are the best part anyway. they wilt a little faster if they're not on the bulb, but that's a small price to pay for sustainability.

and here's another advantage to cutting just leaves: it serves as a signal to other harvesters that this patch has already been harvested. if i'm in the woods and i see cut leaves in a patch, i know to leave it alone and go somewhere else. nobody needs to have been monitoring that patch to know if it's declining or not.

and that's important, because if you're not coming through like a bulldozer, other people coming after you may not know that you've already tapped this patch out for the year.

so i'm gonna ask you: please don't take any bulbs if you don't really need them. you'll still be able to make pesto and ramps 'n' taters and nearly every other delicious thing.

if you need to take some bulbs, cut down above the roots so they have a chance of growing back.

be mindful if you are gathering on public land that probably other people will gather here too.

if we all take just leaves from mature plants, our patches will grow.

that would be FANTASTIC.

my usual study location is still closed to me, so i have found a new study location that sits right on the border between state forest and town land. since i'm now an appointed conservation commissioner in my town, i feel this raises my observations up from the level of frittering away my time looking at cool things right into actual work. you know research and monitoring.

but still i'm just mostly frittering away my time looking at cool things.

anyway, there's a pair of canada geese at my study location.

this is a picture of the male. 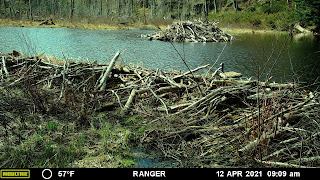 why yes,  there are beaver involved, thanks for asking. anyway.
i was pretty near this spot one day when the female on the nest suddenly appeared. i mean, she'd been sitting on the nest for at least twenty minutes completely motionless and it took me that long to spot her when she decided that i was not a threat and stopped being invisible.
they don't have a magic cloak or anything; it's just that one of the things geese do really well is blend in with the environment.
but on april 6th i was sitting for a while watching her on the nest when she moved around some, and THERE WAS AN EGG and i watched her cover it in feathers, so i'm guessing she had just laid it. i don't know if that was the first egg or the last one, but they lay one a day until the whole clutch is there so now we're twenty days out which means sometime next week there are going to be goslings.
a couple few days after that i was out there with my friend barb  and we were sitting there listening to the frogs and watching the female on the nest when all of a sudden we saw the male's head pop up out over the pond, which indicated a level of alarm.
he started coming closer and eventually we heard it- the honking of another pair of geese coming in for a landing which JUST WILL NOT DO so he came charging out at full speed all snappy and honky and the interlopers did not seem dissuaded but the female stood up on the nest and also snapped and honked at them and the pair decided not to land on this pond after all.
now, when he got all aggressive and started going after the other pair like I WILL KILL YOU she could have said "honey? it's the petersons. do you remember the petersons? they were next to us in the V during migration?"
but no. she did not say that. instead what she said was something along the lines of YESSSSS.  THAT IS SO HHOTTTTT. I WILL HELP YOU KILL THE PETERSONS.
and then he continued to be very aggressive for several minutes while she postured and displayed herself to him and then they did a thing that ornithologists call "the triumph ceremony".
it was very impressive.