i mentioned that there was snow, right?

there's a lot of it. and i have been working hard moving it from the plow piles my plowman thoughtfully leaves at my driveway to the MOUND.

so far it's just a huge mound of snow with some steps, because once you start digging inside, you're done walking on top.

or at least you should be.

some people aren't that prudent, but i'm not into stupid risks.

i am averaging three loads of snow a day, with the average weight of a load being 150 pounds of snow. it maybe doesn't sound like a lot, but it has to be gathered or chopped, shoveled into the boxes or onto the sled, pulled to the structure, carried to the place i want it, and unloaded. 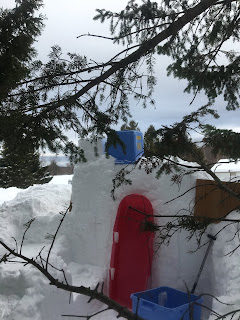 you may have noticed it; i mentioned it once in my last post and it seems huge to me.

i got a promotion.

let's back up and i'll remind you that last summer i went up to the camp for a ten minute meeting and accidentally stayed to work for an ENTIRE SEASON at the girl scout camp, essentially functioning as a junior naturalist / camp life resource person.

and my Vermont Master Naturalist studies focus specifically on the town in which the camp is located, with specific regard to how i might function providing outdoor education and natural history program to the camp in the future.

it got to the point that when having conversations with people that it was just going to be a lot easier to say i'm the naturalist at the camp and it puts a handle on a lot of the things i'm doing without having to take too much time 'splainin' so i wrote to the nice lady in charge of things like that at the council and asked if i could just give myself the title.

as part of my studies and as the naturalist at the local girl scout camp i like to go out after a storm to take pictures at my study location.

last week that meant breaking track in snow that was still over my knees with me on snowshoes.

now the temperature was just above zero even in mid afternoon and while i was dressed for cold, i was dressed for keeping MOVING in cold but even though it was REALLY TIME TO RETURN TO THE CAR i had to go back all the way to rabbit hole, only moving slowly and kicking up snow with the front of my shoes, hoping to kick up my glasses, because although i had dropped them directly in my track, there was still a chance that if i had not stepped on them i might kick them up and find them.

so in all probability i have now stepped on them THREE times. i'm sure i'll find them in the spring, but they're not going to be in good shape, especially since i am not the only person to occasionally snowshoe up there and if you're part of a group renting that cabin, do you break track in hip deep snow, or do you use that handy-looking trail?

so time to buy new glasses. also, i was overdue to get new contacts, so while they couldn't send me home with my new glasses, they COULD send me home in a pair of trial contacts so at least i'm not a menace on the roads.

and you know? i can see much better with those than i could with my glasses, so maybe it was time anyway.
Posted by flask at 10:38 1 comment:

flourish farm had a table at the s'morestice. they were giving out free samples. the dj announced there were crickets and i said i was all about the crickets. i would have BOUGHT some, but they were free. because samples.

this was not my first time at the cricket rodeo and they were the best crickets i've ever eaten. the thai chili was a little too spicy for my tame palate, but the garlic and sea salt was just about perfect, plus it's a sustainable efficient protein.

but you love crunchy snack foods, right? so go ahead, eat your crickets. they're not just for your weird neighbor's frog anymore.

i kept telling people they were the going to be the best crickets they'd ever eaten, but really for most people that's not a high bar to get over.

they had four flavors. i tried the garlic and sea salt and the thai lime. i loved the first one, but the second was too spicy and the nutty flavor of the crickets was just overwhelmed.

still, delicious. and nutritious.
Posted by flask at 20:07 1 comment:

some saturdays ago i went out with barb to play a little ingress and we were headed through middlesex and barb said "ooh. what's going on there?" as we passed camp meade. i'd heard about the s'morestice festival and thought i might could go, but it fell right out of my head until we were passing by.

so we blew up some things and linked some things (we're the RESISTANCE, boys and girls!) and headed back to middlesex to catch the party.

it's hard to explain. people try, but the news items really fall short. this account has the best video of the s'more being served, i think, but it's really hard to capture the vibe of all these people casually milling around and enjoying the assorted fires and the dj's playlist, which included ALL THE FIRE SONGS, plus flourish farm was there with free samples.

cirque de fuego was also there. it was the second time i've seen them and they're an amazing show.

there was this huge hut like thing that they described as a maze, but it was more like a spiral path, in and out. it smelled fresh and was beautiful inside. people brought little notes or trinkets to represent wishes for the new year or things they wanted burned away. 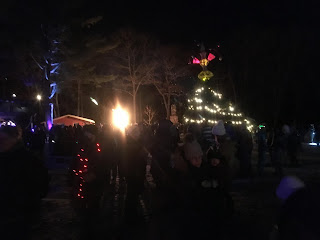 here's a view from the inside, through a porthole: 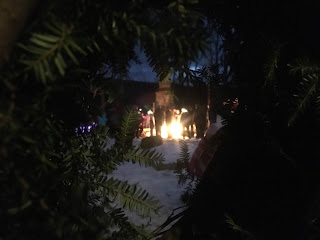 and here is the thing on fire: 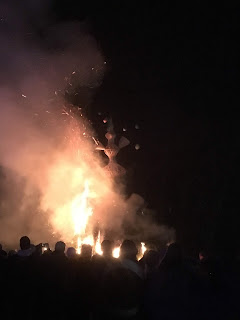 we went camping this weekend in the northeast kingdom. for dinner i made a pot of slop.

i know, that sounds totally delicious, so i will tell you how to make it.

several slices of bacon
a large onion, chopped
carrots? are there carrots in your fridge? great. chop them.
some soaked beans. or canned. doesn't really matter what kind. beans. i used black eyed peas.
some kind of stock, or water and bouillon cubes.
diced potato
cut vegetables. i just tossed in some frozen veg mix i had in the freezer. doesn't matter.
fresh spinach
cheese. any kind will do.

cut up the bacon. you can leave it whole, but it's easier to cook down in your pot if the pieces are small. cook it until the fat is rendered and the bacon is cripsy. then fish the bacon out with a slotted spoon and set it aside.

toss your onion and the fresh carrots into the pot to cook down in the bacon grease. now is also a good time to put in some spices. i used a little slat and pepper (more pepper than salt) and whatever was left in an old packet of fajita mix that was half used up.

when the onions are soft and just beginning to brown, put in a bunch of water and some bouillon cubes, or if you have it, some kind of stock. also add the beans. if you're starting with large chunks of raw potato, add those now. if like me, you're using frozen cut potatoes (because camping. i'm in a hurry here) let the beans cook a while (until just a little harder than you want them to be when you're done) and then add the potatoes and frozen vegetables.

cook them until everything is hot again and the potatoes have your desired amount of doneness. if you overdo the potatoes nobody will really care because it's for camping and it will still be nutritious and delicious and filling. it will just be like wallpaper paste.

toss in some spinach leaves and let them wilt in there. then remove the pot and either stir in the cheese and let it melt, or (my preference) sprinkle grated cheese liberally over the top.

works great if you put a bunch of slop in a heavy duty ziploc and pack it. add the spinach and cheese at camp. 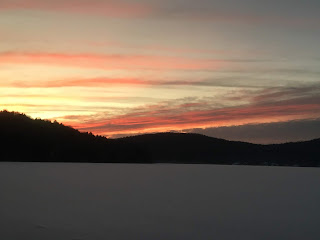 a few days ago i went to my mom's house to fold my map, because i don't have a room in my house with enough floor space. it took me an hour or so, but i got it done.

you want me to back up?

so you know i like studying things and i think i've posted geology things here before, but the problem for me has always been trying to READ the USGS maps online, because they are such huge files and the print is very teeny.

it's hard to learn how to read all that and understand it if you can't get a good look at the map.

and with my vermont master naturalist studies, i have an excellent excuse to really LEARN all that, plus an excuse to have the paper maps that i can use for study and for instruction, which is a thing.

did i even explain all that about the course work? if i have to back up THAT far, it's going in a new post.

anyway, santa brought me the map. my mom hands me this present, a five foot long cylinder and i have NO idea what it is because i don't remember this was on my list, but i'm not really prepared for how huge it's going to be.

folded, the three sheets fit in a two gallon ziploc, so i can take it out in the field. 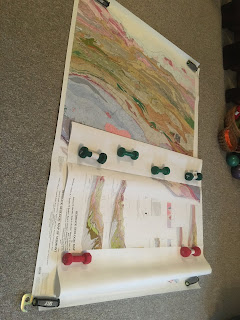 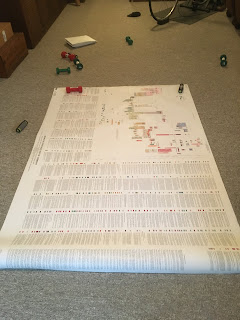