things i did today:

today is the shortest day of the year.

may the light grow within you as well as around you.

here's a picture of a flower i took when it was summer. 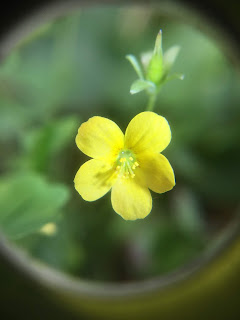 there was this girl.

i met a girl last summer. she was in the uncertain time of her life following the death of one parent in which she was about to go and live with the other parent, in a faraway state.

that had to have been a time of tremendous emotional uprooting, a time of anxiety.

in that in between time, she kept making little crafts; knotted strings and necklaces and giving them to people.

i may see her again some time. i may not.

but if i could day one thing to her across the darkness, it would be "i have a small mess of knots on the dash of my car. i remember you, and i hope you are ok."
Posted by flask at 21:14 1 comment:

i used to have a dressy bessy doll. it was a long time ago.

then last week i was out doing things and all sudden i was starving and needed a reasonably priced sammidge for lunch and there's a place at the top of church street that has a sammidge called the "good time sally" which is a breakfast sammidge with a hash brown on it. i had something called the "murphy's slaw" because they were out of hash browns.

...which is only tangentially related to what i wanted to say, which was something about my dinner.

yesterday i decided to cook and lightly mash some potatoes that i had in the house doing nothing but getting old. tonight for dinner i put some 'o that in a pan and fried it until brown on both sides, fried a couple of eggs next to it, and then layered things in my bowl: spicy black bean burger with a smidge of taco sauce, fried mashed potatoes, slice of cheese, eggs.

i called it the messy bessy.

no reason why, other than it's a mess.

gooey and delicious and easy to make.

you are not sad there are no pictures.
Posted by flask at 17:13 2 comments:

i had some good apples and cider leftover from thanksgiving and i wanted to cook a little something with them and i was thinking something in a pan from the family of slumps and cobblers, but i didn't want a crumb topping and i didn't want it to be to hard (read: i am lazy) and my friend rapunsell suggested i bake a clafoutis.

so i cooked down the cut up apples a little and went from there.

and then it was so delicious plus i still had apples and cider so i made another. and then i was thinking i could make a savory one and THEN i was doing research on that and learned that properly a clafoutis is only made with black cherries, and that if you put any other fruit in it, it is properly called a flaugnarde.

so before i go off telling you how to bake these two bad boys, imma tell you the basic recipe i was working from and give you an ingredient list.

3 eggs
about a cup of milk (i am told alternate milks work just fine)
about a half cup flour (i am told alternate flours work fine too)
about a half cup of sugar (brown or white- whatever, and less or none for a savory batter)
2 tbps melted butter (or less. i one recipe i used none. it was just fine)
a pinch of salt. (two pinches for a savory batter)
optional vanilla, almond extract, spices, whatever you like.

basic procedure: for already soft fruits, take enough to mostly cover the bottom of your greased pan. pour the batter over the fruit and bake at 325 for about forty minutes. serve immediately (puffy) or later (dense and compact). if you undercook this slightly, you get a nice custardy center. overcook it slightly, and you get something more spongy and firm. it is really not a critical value.

there are so few critical values that i am not particularly specifying amounts of things, but i am tossing in some ballpark figures of what i used.

while you're cutting up your apples, begin to reduce cider in a pan (two cups?). this will take a while, but it does require supervision so it doesn't burn when it gets to the end. essentially you're boiling off the water and at the end you'll stir pretty constantly until you have a just barely thickening apple caramel. for right now, though, you have a pan of boiling cider.

turn your attention now to peeling your apples (for me, four medium sized apples). that done, take a couple tablespoons of butter and brown it in your pan (i'm using a dutch oven here) toss in yer apples and cook them down a little until they're a little browned and only a little softened. i like mine on the soft side, but some people prefer them crunchy. you do you.

mix up your batter so it's free of lumps. i used vanilla and almond extract in mine.

by now your cider caramel will be almost done. when the water is boiled of and the syrup starts to thicken, scrape it in to your pan with the browned-butter half cooked apples. pour the batter over it and pop it in the oven. about forty minutes later it should be golden and puffy and perfect.

start by soaking your dried tomatoes (about 1.5 ounces dried). i used homemade vegetable stock (a cup and a half) and a sprig of rosemary, but you can use water. you can cut the tomatoes before soaking with scissors if you like, or after with a knife. a little salt in the soaking solution will help them absorb better.

if you soaked these ahead of time and you want a flavorful glaze on the bottom (fancy!), you can just start here with taking the soaking liquid and tossing it in a pan with some balsamic vinegar (enough that the whole thing looks black?) and begin to reduce it until it just starts to thicken.

now's a good time to make your batter. i seasoned mine with a little black pepper and just a little ground sage.

turning your attention to the tomatoes, brown a tablespoon or two of butter in your pan (again, i'm using a dutch oven). the browned butter adds a nutty sweet flavor that i like. here i tossed that sprig of rosemary in to squeeze out a little more rosemary flavor before i fished the sprig out and threw it away.

your balsamic reduction is probably finishing up right about now. set it aside for a few moments.

toss yer tomatoes in the pan and let them just toast up a little until they darken. this deepens the flavor of them and brings out some caramelized sugars. spread them out in the bottom of the pan, and then scrape the balsamic tomato reduction into the bottom of the pan. scatter the crumbled goat cheese (about 2 ounces) around among the tomatoes, pour the batter in, and pop the whole thing in the oven for about forty minutes or until it's nicely golden on the top.

the balsamic reduction will look like you burned the dish, but it makes oh so lovely a sauce on the bottom.

i keep meaning to write to you when things are still news, but let's face it; neither of you lives near here so i guess it's all news.

a couple of weeks ago barb called me up to ask if i wanted to go to the waterbury river of light.

of course i did.

it's kind of an amazing community festival. it is beautiful, brief, and has no ideological underpinnings besides "yay, waterbury!" and "the winter is too damn dark".

they always pick a general theme for the lanterns, but anybody who has a lanterns or some lights can just step into the parade and be a part of it. as the parade passes where you are, you usually step off the curb and process down the street to the rec field where there are bonfires and fire twirlers.

this year the general theme was farm to table, and because i was on the street above the klezmer band (which only marched half the parade and picked up the procession at the corner of main and stowe streets) everyone who joined the procession before that corner got swept up INSIDE the parade instead of after it, which was cool. 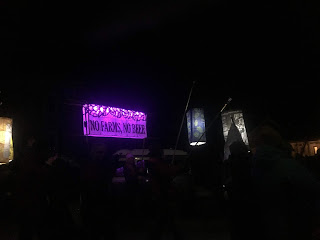 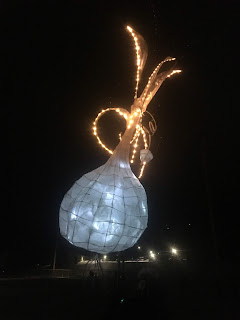 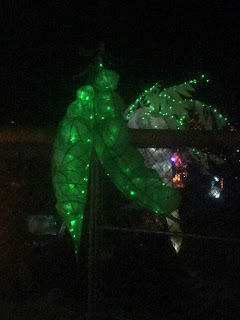 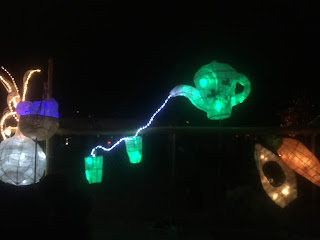 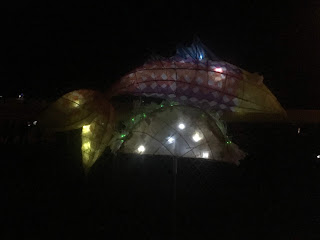 unless you just walked in ten minutes ago, you know that i like challenges.

some of the challenges i do are set for me, like the venture vermont challenge.

others are things i challenge myself to do.

this year i decided that i would like to camp in every month of the year. i guess it was because i was talking to someone about cold weather camping and i realized i hadn't actually camped in every month of a year, or something like that. i don't recall fully. it was last january when i decided to do it.

i figured the hard part would be getting january, february and march, since the other months seem to take care of themselves, but the ultra cold extra snowy thanksgiving followed by the gigantic snow dump that left my power out for the better part of three days cut short my november/ deember outing, meaning that to complete the challenge i had to make a special trip in december.

complicating the planning is that the easiest place to camp, little river state park, is really only super easy to camp in until december ninth, when they close the gate at the conclusion of muzzleloader season and you have to hike in just like anywhere else.

so i looked at my calendar and the forecast and my package tracking.

that's right. package tracking. because i order myself some spiffy new down camping quilts and i wanted to go with those, yah-boo.

here is the view from my bed: 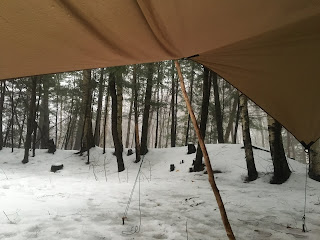 and here is the view of my campsite: 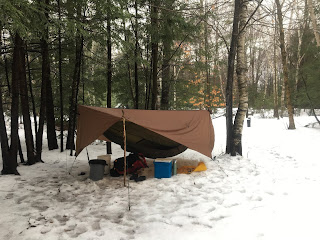