people keep asking me why, if my hammock is SO COMFORTABLE, i do not sleep in it at home.

well, i was having trouble finding a place to hang it.

because now i am sleeping in it at home. 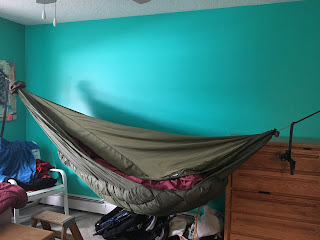 last night three things blew out of the protected area on my porch and went off to try to start new lives on their own: a recycling bin, an expedition sled, and a freaking chest cooler.

i put on boots and went off in pursuit.

they'd had some hours of head start, and there were a couple of inches of ice pellets on the ground, so no tracks to follow.

i figured to go in roughly the direction of the wind until i came to the border of the woods, where surely they would have gotten snagged and come to a stop.

only the wind is strong and variable.

and by strong, let's say that i found myself on top of a glazed pavement on a slight uphill and the wind blew me UP it like some weird uncomfortable people moving sidewalk.

eventually i came across some recyclables that looked like they might have come from my house and i looked off in that direction to where i eventually found my recycling bin on the side of a steep icy hill and beyond that, my sled.

i am not kidding you when i say i had to go on all fours, not because of the terrain, but because the wind was so extreme.

and that was before i had a sled and a recycling bin in my hands.

i was in view of my house and legit feared i was in danger.

it was slow going. four or five steps into the wind, stop, sit, rest. i thought i'd pass out.

eventually i got back to the house.

the whole trip (not more than a few hundred feet) took an hour.

i am ready for my nap.

it's the most wonderful time of the year!

i have already downloaded and begun fondling my score sheet.

there's so much awesome stuff on it!

and because "go skateboarding" is on it, i am going to see if i can get a friend's children to  take me, fifty-year-old newbie, and teach me to skateboard.

rain hike? i'm all over it.


i love this so much.

well. that was a time.

suffice it to say that i kicked some serious ass and when it was over i had a little rest.

and then i had a super busy thing about a girl scout thing, and there's not a lot i can tell you about that either.

and then i was sick.

i lost a whole week.

last monday i went to see my doctor finally and she thought i had poor long inflation and thought it would be best for me to go to the ER so there was that and it turns out i don't have either flu or pneumonia, so that's good.

they put a bag of saline in me and gave me some treatments. there were two nebulizer treatments that didn't do squat but made me feel ALL HOPPED UP AND JUMPY but then they did a third with some other drug in it and i have no idea what that other thing was (probably some kind of inhaled steroid?) and within an hour i was breathing again in ways more recognizable as breathing.

i spent a lot of time in my hammock watching youtube videos.

today is day three of getting dressed and sitting up.

partyhat.
Posted by flask at 09:42 No comments:

easter at my mom's house

because of course we have to have an egg hunt even though nobody is younger than fifty, and my mom has been a vegetarian for decades and an atheist since 1963 but we all have to show up to eat an easter ham.

there were these cute little cake pops for dessert.

i never saw the attraction of cake pops.

are you an american citizen?

have you heard that the president wants to put a question on the next census that requires people to state whether or not they are citizens?

they make it out to be that it's purely informative, but what it's going to do is get immigrants and whole immigrant communities to opt out of being counted, which will skew representation and services to the overwhelmingly white and privileged.

and you know the only thing that's going to stop that shit?

if the white and privileged step up and stop it.

so when the census comes, i am not telling whether or not i am a citizen.

come to think of it, i may decline to give my race, or just call myself "other".

i invite you, too, to gum up the works any way you can. not every action need be large.
Posted by flask at 14:00 1 comment: