i love ramps, but the only ones i had ever found were in the grocery store, and that only because the small market in the nearby town has a forage supplier.

the thing is that they are very common and grow in a lot of places, but also not entirely predictably and they're not easily domesticated. you can totally grow them in your garden, if your garden is a slopy woodland with a lot of shade.

so, not good terrain for commercial cultivation. the upshot of this is that foragers have a history of over harvesting them because there's a lot of demand for them at farmers' markets and upscale restaurants. the problem has gotten so bad in quebec that it's illegal to pick them for commercial purposes. ramps are a slow growing plant. they are on the decline nearly everywhere, but they don't have to be.

MB (who coaches me on a lot of these things) tells me that if you only take one leaf from a plant and don't dig up the bulb, a patch will do just fine.

anyway, i found a patch. a big patch.

so this is what i did with them:

i made a pot of good fresh pasta and while that was cooking, i heated some butter in a pan and tossed in the cut ramp leaves until they were wilty. then when the pasta was cooked, i put some of that in the pan with the ramps and butter and some of the pasta water and cooked it just until it thickened and i tossed it on a plate with a salmon fillet cooked good and plain with just a little salt and pepper. 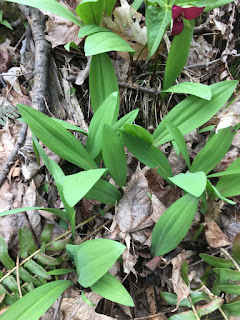 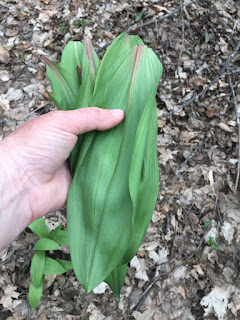 here's a story from a long time ago.

i was working as a housemother at a boarding school. not important which.

and it occurred to me to wonder how easy it was for the students to look into my bedroom window, so i went out on the fire escape ostensibly to clean the windows on the outside.

later that day one of the students came to offer me a homemade cleaning solution along with the subtle message: we know you were spying on us.

oh, how wrong he had been, but what could i say?  "i was only checking to see how easy it is to spy on me"? because THAT would totally not have sent up any flags.
Posted by flask at 06:00 No comments:

burtonsville rig and a star fire

at thanksgiving camp i have to keep a fire going most of the day.

in summer i will often not make a fire at all and only then for cooking, but in winter this becomes a matter of safety as well as comfort. with a fire going all day, you can warm up in a hurry if you get a chill, and you always have fire to make hot food, hot water for washing,  and if you have a pot hanger, you can keep tea water just below boiling all day.

with an adjustable pot hanger, you can just drop the pot down a notch and get your water right hot on the quick.

plus you know i love to have a project.

there's a lot of advice around the interwebs on how to make various cooking contraptions and you can really fall down a rabbit hole on that one, but i like this guy.

mine wasn't as elegant as some of his, but it is serviceable and a good beginner effort.

and oh, man! having hot water all the time makes such a difference at a cold weather camp!

this camp was also the first time i used a star fire configuration. it's not tidy and can't be used in a busy camp or one with kids but it saves you a lot of time cutting wood and you can control the heat and the rate of burn very well by pulling the spokes in or out. you can move the shorter spokes to the areas with more traffic and leave the longer spokes away from you until they shorten up. 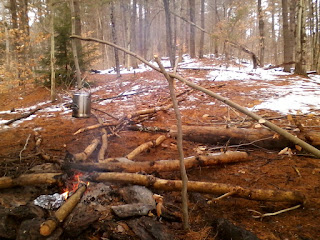 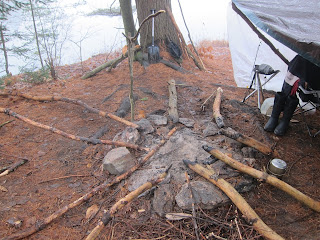 i'm just going to call this thanksgiving camp no matter when i camp there from now on, i guess.


anyway, if we can go back to thanksgiving in the story, i was staying on remote site #3 on the res, which is extremely handy for camping at thanksgiving because it an be reached by foot if you know where to park and pick up the unmarked trail.

it takes about the same amount of time to walk in from the road as it does to paddle across and it has the added bonus of you con't need to put in a boat.

of course, you can't carry so much gear on your back, but it makes a nice alternate approach for visitors to camp.

here are two pictures of thanksgiving camp from the water approach. don't be fooled by appearances; the one with snow is some days earlier than the one without. 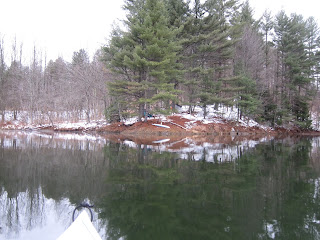 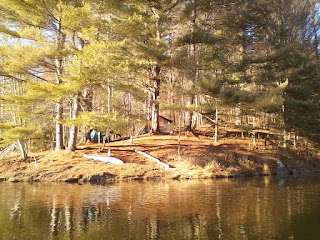