for some reason the DCCC keeps writing to me to tell me that they are very sad that i have not renewed my membership, which is odd, because i've never HAD a membership. yet they thank me for my support and ask me twice a day (at least) to give them money for their critically important battles against the REPUBLICANS.

see what they're doing there? that's the crux of it. they're not actually battling poverty or hunger or the lack of appropriate healthcare or the criminalization of just being a person these days. they LOVE mass surveillance. they LOVE militarization of police forces. they LOVE compliant subjects, and not thoughtful citizens.

i'm just going to suggest that many of the problems with crime and terrorism would be solved by taking away the societal and governmental systems that make people poor and disenfranchised. i'm just guessing.

hey, it might not work, but the current regime of increasingly repressive violence on a worldwide scale doesn't seem to be working so well either, so how about we give this a chance for a while?

anyway, it doesn't really matter if it's the demmicans or the republicrats in power; we're all getting screwed and both sides want us to think it's a grand and worthwhile battle.

it would be if they were concerned with GOVERNANCE instead of CONTROL,  but they're not, so it's not.

anyway. i had to unsubscribe AGAIN from the DCC mailing list (second time this week) adn in the little field where they ask you WHY you want to unsubscribe, i wrote this:

because i'm never going to give any money to you filthy corrupt warmongering assholes, even though you keep thanking me for your support. your politics theater nauseates me and you all deserve to be clapped in chains until somebody does some actual governance instead of staging mock battles against the republicrats to distract us from the fact that all you guys do is strip the land and people for maximal profits. NO MASS SURVEILLANCE. NO TPP. NO MILITARIZATION OF COMMUNITY POLICE. NO MORE WAR.

until you can do something about THAT, you're not getting a thin dime from me, you hypocritical lying scumbags.
Posted by flask at 10:21 No comments:

i'm still cleaning up stuff. here's another poem i left for val at attendance time.

already now the year is growing old
and snow has covered up the last green grass
and in my bones i feel the creeping cold
but for a time, i'll pause here with this class

and taking inventory, there is cheer
for each and every precious child is here.

last week i was emptying out some of the boxes of stuff that came from my classroom when i cleaned it out. when i first brought all that stuff home i couldn't stand to look at it, so it's been in the corner of the basement for a lot of years.

in one of the boxes i found this, my nerd manifesto for years i kept it stapled to the inside door of my classroom, so that kids coming and going saw it every day. i may not have been cool and popular as a kid, but i was cool and popular as a teacher, so it was important for me to be able to say that to all the kids, and not just the nerdy ones. 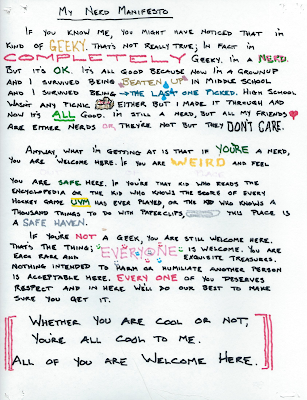 If you know me, you might have noticed that i'm kind of geeky. that's not really true; in fact i'm completely geeky. i'm a nerd. but it's OK. it's all good because now i'm a grownup and i survived being beaten up in middle school and i survived being the last one picked. high school wasn't any picnic either but i made it through and now it's ALL good. i'm still a nerd but all my friends are either nerds or they don't care.


if you're not a geek, you are still welcome here. that's the thing; EVERYONE is welcome. you are each rare and exquisite treasures. nothing intended to harm or humiliate another person is acceptable here. every one of you deserves respect and in here we'll do our best to make sure you get it.

whether you're cool or not,
you are all cool to me.
all of you are welcome here.