a long time ago, i used to play a game called glitch.

unless you just met me you know that i live on this world as if i am at home in it, and that i love trees and plants and animals and rocks and i have a strong sense of place, and glitch was a game where you got ahead by being kind to the plants and animals and other players and you had to know your rocks and how to cook garden and build and it paid you to be kind to others.

it was also a game with stunningly beautiful graphics and sound. just as an example, here's me playing the quest "last pilgrimage of esquibeth".

i mentioned to you some time ago that there were two projects trying to recreate the game from its public domain assets, eleven and children of ur.

CoU isn't as fully functional as eleven, but anyone can go in and wander around. i recommend you do. also, zhoen, you should probably apply to get into eleven if you can. i imagine you will love tending your flowers there, and wandering around peaceful streets with nice music.

i totaled my points and checked my documentation.

i sent off my form yesterday.

soon, i hope, i will receive my new medal.

hopping up and down on one foot

it's weird, but i was sure to get this one because spoon carving is a thing i do.

and yet this was hard, because there were other things i had to carve, and for some reason i insist on carving spoons out of applewood, which is hard and has irregular grain. 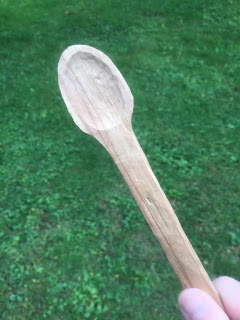 this spoon isn't finished, but it's pretty obviously a spoon.

i'm going to remove some material yet on the handle, and make it more graceful.

this summer i was working on another spoon and some kids were watching and one of them asked me if i thought it was a good spoon. i said i thought it wasn't yet, because it needed a lot of work still but that it was clearly a spoon. all the kids in that immediate area seemed relieved that i wasn't calling it done; it was almost like it was a test of my own perception and ability.

i sort of felt like if i'd said i thought it was a fine spoon they would have stopped trusting my opinion.
Posted by flask at 21:50 1 comment:

2019 venture vermont:Learn a tongue twister and say it as fast as you can.

i found a tonge twister that i like: "how can a clam cram in a clean cream can?" and in the course of learning to say it, i came up with this little ditty.
Posted by flask at 06:00 1 comment:

i love me some vermont state parks, so "Hike in a VT state park" isn't super hard for me to complete.

the tricky bit these days is finding an easy enough hike and hitting it on a relatively pain-free day.

so i was on my way to ricker pond state park...

this isn't a joke.

news flash: you can't get there from here.

why, you may ask, did i do this thing?

because i had the time. and the weather was nice. and i was feeling good. 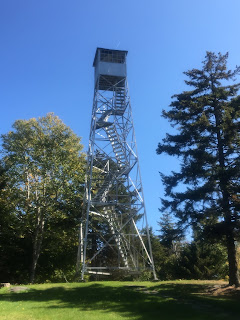 AND ALLIS STATE PARK HAS A FIRETOWER.

"but flask", you are probably not saying, "but flask- isn't there a firetower on spruce mountain in the LR Jones state forest, which is contiguous with the groton state forest and reasonably close by?"

why, yes. yes there is. the thing about that, though, is that i typically only hike to that firetower in the winter months because some hikes are just easier for me with snow on the ground. and gile mountain is far away and hard. ditto belvidere. mt. olga isn't that bad, but it's a LONG drive. ever been to the fire tower on glastenbury mountain? yeah, that's a two day project. 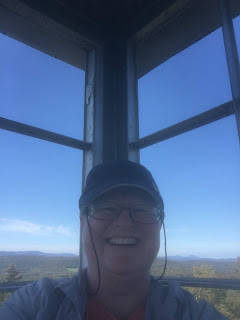 what i'm saying here is even if it's off-season and you have to go up from below the gate like i did, the tower on bear hill in allis state park offers a gentle hike i can do on nearly any day. plus it has fantastic views. 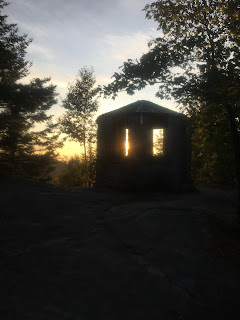 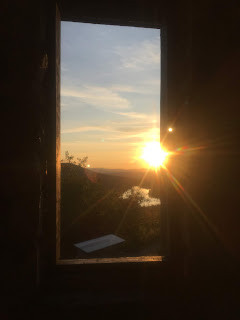 then later in the day after i pitched camp i went for a drive and i didn't mean to but i went up owls head and i wouldn't have called that a firetower, but apparently the stone lookout functioned as a firetower when it was built in 1935, so it could also count, i guess.

and then for good measure i hiked up owls head again on saturday afternoon because my friend barb likes a view.