ok, so i'm getting ready to leave the house to do a little light trail work and go to the pharmacy and then to a nice dinner at a restaurant for my brother-in-law's birthday ad for some reason as i pass the mirror in the bathroom i lift my shirt up a little and

i don't recall having an angry-looking purple welt there...

now, i've had a bunch of tick bites and picked off countless ticks before they bite, and one of the things about the legs is that they move, which is what makes them so creepy.

typically, they bite, they dig in, they feed, and then they drop off to lay eggs. this one, apparently, has died WHILE DEEPLY EMBEDDED IN MY FLESH, so that's kind of icky, and later on i will get around to wondering why it dies there; i mean, have you ever tried to kill a tick? they're like, bombproof. you have to squeeze HARD.

and i figure that the last time i might have picked up a tick would have been monday, so it's been there four days at least, and i'd have had to have picked it up in the adirondacks, where supposedly they don't have ticks.

oddly, the last embedded tick i had, i got in the adirondacks, where they supposedly don't have ticks.

so i call my doctor right away, because this thing has to come out and considering how long it's been in me, i'm going to need doxy. (do you remember when "doxy" referred to a woman of questionable virtue and not a strong antibiotic?)

and they tell me they'll have the triage nurse get right back to me, but nobody calls for an hour and a half so i call them back and it turns out they don't think it's important to return my call because they have nobody available to see me today and i should go to the walk-in care clinic.

well, that's nice. ya think it would have been useful to call me and let me know?

so i put together my things and head out to walk-in care, and i am not really prepared for what i find there. it's not quite matthew brady, but there's a lot of misery there.

the guy at the front desk barely looks at me and asks "chest pains? cough? fever?"

uh, no. embedded tick. probably infected. probably not lyme, but dirty, you know?

well, it's going to be a long wait, he tells me.

a couple of hours. he tells me to have a seat in the waiting area.

i am not comfortable in there. the place is jam-packed with people who have the flu. our area actually has a cluster of real live H1N1 cases, so they're all suited up with masks and such, but they're all coughing and feverish.

i'm all, like, GET ME OUTTA HERE! THIS PLACE IS FULL OF SICK PEOPLE!

but i'm going to need the doxy.

the guy calls me up to be checked in. he notices that i do not touch the desk or any other part of the furniture if i can't help it. he offers me some of his disinfectant, which i take.

i return to the waiting area. i feel very much out of place.

see, now i've felt pretty complacent about H1N1 and every other flu or cold because i have a robust immune system and i live alone. not alone in the city; alone in the country.

flu epidemic? i don't care. i don't come into contact with people.

but here i am at the hospital, surrounded by people with flu. and you just KNOW that some of them have H1N1, not that i care about strain.

i mean, i haven't had a cold in so long that i don't even remember if it was four or five years ago.

the intake nurse comes to get me, and i express to her my tredipation at having been plunked down in the middle of all these sick people. i mean, just take the tick out and give me the doxy already. it's not very complex.

she suggests that maybe i might have a friend take the tick out. ok, fine, but even if i could get a friend to take it out properly, i'll still need the doxy.

at this point it becomes apparent that even though it is not yet three in the afternoon, i am going to miss my five-thirty dinner reservations with my family.

i am sent back to the waiting area, but i ask the guy at the desk if i might do my waiting outside, where there isn't quite so much plague floating around in a closed space.

he says sure, and goes so far as to suggest that i might wait in the main lobby (just around the corner), where typically they do not allow people with visible symptoms to hang out.

fine. i make myself comfortable there.

i call my mom, to explain why i'm going to be late to dinner. she says that they'll stall if they can, and they'll order for me, which ought to give me a little extra time.

somewhere just before five i get impatient. i have read the end of one book and made a good start on a second. now i get up and start pacing.

and finally someone comes to get me.

"i'll give you a gown and come back when you're ready."
"i'm ready", i say, pulling off my shirt and dumping it on a nearby chair.

so the guy comes to take the tick out and he starts to make friendly chitchat but i cut him short, saying that i'm already going to be late for a dinner reservation, so we keep it pretty much to business. he gets most of the dead tick out, telling me not to worry about the parts left in; what's there is buried pretty deep and my body, he says, will push it out just fine.

he disappears to write the scrip, and just this last part takes twenty minutes.

seventeen minutes later i am at the restaurant, and the moment i sit down the waiter puts my plate in front of me, and what has been ordered for me is fabulous, so that goes a long way.

but what i want to know is this: why did the tick die? why not feed and drop off, like they're supposed to? is there something toxic in my blood? is one of my medications fatal to ticks?

a day on the road

out on the road there's a routine to adhere to, both because peregrination demands it, and because a routine makes it easier to manage the many details of "stuff" that has to be tended to.

for your amusement, i'll try to reconstruct my typical day for you, in handy list form: 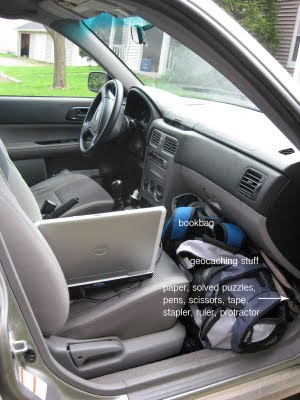 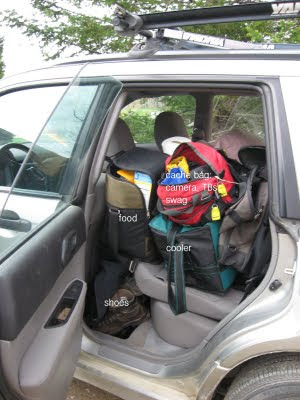 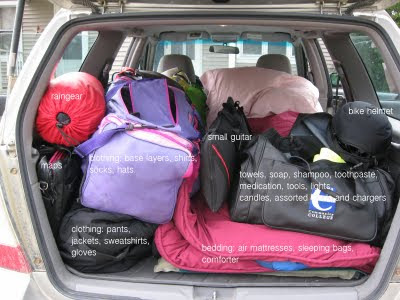 i'm out on the road. while i'm out here i live in my car, hanging the loose "where" of my days on geocaches and stopping at regular intervals for prayer.

so out here i need campsites, food, fuel, and occasionally an open network.

there's a sequence to it.

to start, i have to establish a "home" from which i can cache. sometimes this is an actual campground, but i can stretch my trip a LOT longer if i find free legal campsites.

they're hard to find.

so if i have one, i can stay there and while i'm out caching i look for others, and when i find another, my area expands to what i can practically reach from that new base. it's kind of a game of leapfrog.

around the new campsites, i have to find public restrooms or outhouses that i can use, because these are not typically present at the campsites.

and you NEED those things.

i also need open networks that i can use to pick up my email, send messages, and do research. most libraries have open networks these days, but out in rural areas it can be tricky to find libraries.

and pizza! pizza is the ideal food for the roadtrip; $16 usually buys you enough pizza for three meals. it can be eaten cold, and it comes in a handy box. it's nutritious and you can get different meat and vegetables on every one you get, so you can kind of vary what vitamins you get.

sometimes you can find natural springs to fill up your jugs, too. sometimes the water is sweet and good, besides useful.

i also have to find gas stations and pharmacies and churches; i always say that wherever i am on sunday is where i go to church, but that's only partly true.

the whole truth is that as i travel from town to town during a week, i get a sense of where i should go to church. i consider it prayerfully, trying to get a feel for where i ought to be.

typically at least once in a trip i will return to a church where i have gone already because i'm returning to friends, but i also like to stretch and make new friends.

i start to feel more at home on my earth, welcome and comfortable in wider and wider ranges.


and all of these places go on my map: springs, privies, campsites, churches, pizza places. it all goes in my giant database of amenities so i can find my way back later.

out where i am now there are a lot of roads that are on the map but they don't go through anymore. it's easy to get lost or have to go around the long way, so i got this brilliant idea: map those so i can avoid them later!

so my day is partly geocaching, partly searching for amenities, partly study and partly prayer.

if i can be of service to someone along the way, that's just gravy.