i thought i was going to pass on this one, but i was hanging out on a campsite and thought it would be fun.

so i built the doorway first, a stone arch. that was a bit of an engineering feat and took two days for me to get it right. then i had to make some kind of roof and i don't know how you are with your fairy houses, but i wanted to make the fairies (ahem) something waterproof so i whipped up a little covering framed in knotweed and covered in knotweed leaves.

side note: while i was working on it i mentioned this to some very nice religious ladies of my acquaintance and the were HORRIFIED. "you don't believe in fairies, do you?"

"heck, no!" i said. what i did not say is "i don't believe in any invisible magical friends, including yours." i'm sure they would have been willing to do me the favor of pointing out the grave error of my ways in believing in fairies had i done so, but i'm more polite and don't consider myself to be doing people a favor to point out their shortcomings.

anyway, i built a fairy house.

it was fun, because i had friends coming to visit with children, and i was just waiting to pretend i didn't know anything about it, but maybe own up to having heard tiny little construction noises in the night. 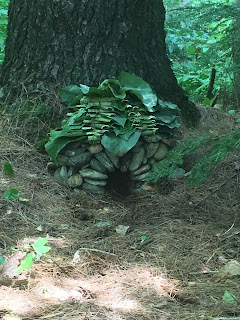