2020 Venture Vermont: Photograph two kinds of mammals in the wild. Identify the full species name and describe its behavior

mammals are hard to get pictures of. they move quickly, and aren't into posing while you adjust your camera. 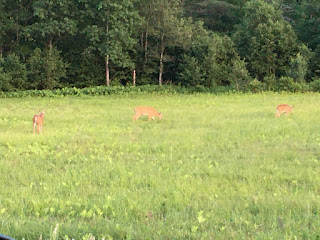 these white-tailed deer (Odocoileus virginianus) are aware of my presence, and their ears are pointed toward me, but they're not worried enough to stop grazing. this group will probably feed for a while before retiring to a bedding area to chew their cud.

my beaver video here was taken at an undisclosed beaverpond in jericho. i was minding my own business taking sedge samples when all of a sudden and VERY NEAR i heard the beaver tail slap. i was a little afraid she might rush me even though as a rule beavers won't get out of the water to challenge you.

a large beaver (Castor canadensis) is a powerful animal capable of severing you arm if it has a mind to.

a mature female will live on her territory with her mate, her yearling offspring, and her new kits. the yearling offspring will help raise the kits until they have to leave and find territories of their own. any beaver in the family group may patrol the territory and communicate with the others, but the large territorial display is likely to be the boss lady.