again into the unknown.

so my lazy day turned out to be quite a full day of "stuff". at noontime prayer i happened to have been here, and ordinarily the church wouldn't have been open, but there was a guy doing some work and he didn't mind if i sat a while.

then i went over into NY, where i was pretty lazy and didn't really want to walk a whole half mile to get to a cache, and almost didn't, but then i felt that little "tug" and i went.

it was beautiful, too, and about halfway out i met a woman coming the other direction and between us was what i thought was her dog. she thought it was mine. on closer view, it rippled too much to be a dog. it was way too slinky.

and then i wasn't going to do that multi in town, because i normally hate the "write down all of these numbers" type of cache where you spend hours wandering from insignificant point to insignificant point, but once again, little tug.

and i was confused more than once by the layout of the coordinates, and at one point the number that the directions seemed to indicate was -6. you maybe don't think about this, but no set of coordinates includes negative numbers.

so i decided that 6 would be just fine.

but it turns out that i am standing right where i need to be right when i need to be there as the woman comes walking down the street whistling "la donna e mobile", which you don't hear on the streets so often these days.

i can whistle pretty good, and i know that aria, too. so i joined in, which surprised her rather a lot, i think. so we stood and talked for a long time. she's elderly, has epilepsy, and is none too wealthy besides. she uses a vagus nerve stimulator, which was interesting to me.

then because i had been talking to her instead of looking for waypoints, when the time came for afternoon prayer, i happened to be standing at a place where was written many times:

may peace prevail on earth. 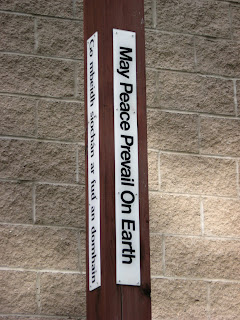 i didn't think i could do any better than that,so i didn't try.
Posted by flask at 09:01