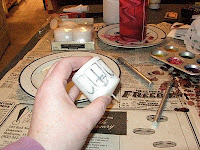 my lenten project is to make some nice candles for people to take home from church at easter.

it's  a meditation, to sit and carve the designs into the candles and to patiently fill the holes with colored wax, and it's also an act of faith: you never know what the design is really going to look like until you scrape off the extra wax when you're done. 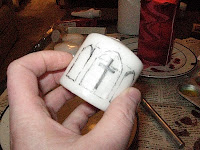 every year i have to learn the medium; what you can do with the wax is largely dependent on how crumbly the candle is, or how sticky it is, and what kind of coating is on it. places where two colors touch are tricky because you have to be very precise with the cutting. 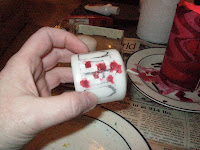 the good news is that because you're going to scrape off the top layer anyway, you can go crazy with the sharpie making your reference marks and the general sketch. the sharpie is also handy for marking out any area you're going to want to be white later. to me it's easier to see that solid black area and carve around it than it is to carve around an outline. it also shows up better when you start to lay in wax around it. 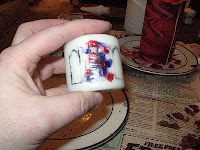 so. loosely sketch the design. carefully, carefully cut out a section or a few sections that will have the same color. welt the wax just enough to fill the holes, and then run over it with a hot knife to set the wax in. 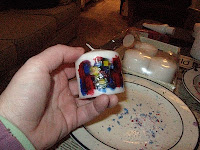 scrape away enough of the excess wax so that you can see where to make the new cuts for the new color and repeat this cutting, filling, sealing, and scraping until the whole thing is filled in. 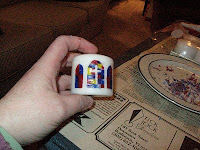 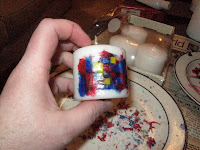 carefully, gently, patiently scrape away the extra surface wax until the design is revealed.

That's awesome how that candle turned out. I was looking at the first three pictures like ...what?
XD all a part of the process. Haha.