back in the saddle

i get ready to go to my race tonight and all of a sudden i feel like i'm ready to ride well. i decide to wear my eastern cup championship jersey; you know, the one they gave the winners. 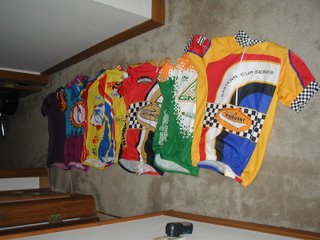 i have a full collection of catamount jerseys, right back to the first one and right up to the current one, the second in the post-merger era. this is all of them except this year's; the one in front is my eastern cup championship jersey. its design is based on the red checkerboard jersey, which is my favorite.

and i feel tonight like i can ride as if i deserve to wear that shirt. so i head out of the start como un pipistrello d'all' inferno and things are going good but i hear this kind of knocking noise going over roots and things and i just had my shocks overhauled and i think maybe there's a problem with that, or that maybe while we were messing around getting rumblestrip's bike ready i maybe neglected to seat my own front wheel properly.

there was a bit of a to-do over rumblestrip's bike. she's riding my spare bike, my old blue rocky which is still a very fine bike. it is a precise carving instrument. it is raceworthy. for me the problem is that i'm not getting any younger and my back couldn't take the punishment and i needed something in a full suspension so i have a rugged-looking red rocky.

but we're getting the bikes ready for the night- crashco is replacing some old brake pads on his bike, and i'm re-inflating rumblestrip's tires, because last week when it was so muddy i took a lot of air out of her tires (and mine) because your wheels grip better in slippery conditions if they're soft. tonight the course is hard and dry and the idea was to fill the tires up for speed rather than grippiness.

but her rear tire won't inflate; turns out it's blown out at the valvestem and crashco, bless his heart, takes time from his own pre-race chores to change the tire for me. i might ought be able to do it; i used to do it all the time. but how to change the tire has fallen into the chasm of memory loss. some of it i'm sure i could figure out, but we just don't have all that much time.

so anyway, i'm hearing that noise. a knock. and i'm worried it might be my new headset. i just don't know. i know it is not a good noise, so i'm not going quite as fast as i might.

but here's the thing. at the start line i took a moment to ask bob to help me keep my courage, to help me ride strong. i know i said it in an earlier paragraph, but it think it bears repeating: to ride as if i deserve to wear that shirt.

and about a mile in (the course is 3.1 miles, and i was signed up to go around twice) there was a terrible crack and my saddle came right off of the seatpost. for a little way i managed to hold it by clenching my butt cheeks, but i ended up putting it in my pocket.

one of the bolts that holds the seat on the post had gotten sheared off. the saddle itself is still fine. which is good, because i'm very fond of it and i paid a lot for it.

but i had to think: what would i do if i had committed myself to riding my best ride? quit and walk in the shortest way?

not hardly. strength and courage demanded that i at least finish the one lap.

so. two miles. no sitting down. i got off and walked all the technical bits; there are some injuries i just don't want to have to explain in the ER, but wherever it was straightforward trail i rode. and where it was downhill with few obstacles, i rode. weight on the hands and feet. just hover. carefully.

Way to go!!! Bravo!! You were brave and Bob helped you all the way. I'm so proud of you. For every obstacle, you find a way around it or through it! If I'd been on the sidelines, you'd have heard me screaming the above words and trying to whistle which I'm lousy at but at least I make a noise of encouragement. A standing ovation to you my friend!
Good night for now. 8:37 p.m.

Hey you. I'm keeping up on your doings and very proud of you. Probably known you longer than most in this world and happy to reconnect via this forum of yours. As I light a cigarette and contemplate the thought of a bike after 18 hours a day in the kitchen, or even one, I marvel at your wherewithall. Let me know when, and chef will cook for you Best, CN