well, it was a branch, actually. probably not any closer than twenty or thirty feet, but i was running toward it and i was alone on the trail when it fell. scared the willies outta me. and when crashco came out to meet me, it started to pour again. and then rumblestrip came as well and we ran in together and i ran so hard that when it was over i just staggered a ways and then fell headfirst into a puddle. i meant to sit down, but i was having some trouble with the muscle sequence. 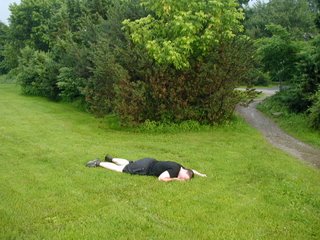 crascho took some very funny pictures of it, including one of rumblestrip with her foot on me as if she'd just bagged me and now had to take me to a reporting station for tagging.

i feel i ought to catch up on my geocaching logs, in which i am a full threescore behind. christine, geocaching is a worldwide game. many of us play it as a sport, and many of us play it as a casual pastime. my mom is a casual player. my dad is an obsessive player. i insist that it is not about the numbers but yet i play it obsessively and i will deny under oath that i said this, but i am secretly very pleased that i would have a very respectable worldwide ranking IF i allowed the people who keep these records to include me in the rankings. 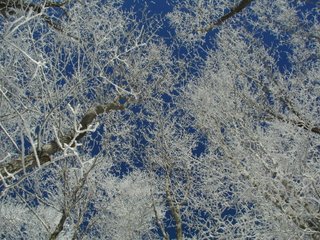 what is certainly true about the way i play is that for me it is very much about the story of the trip; it is an amazing thing to spend an afternoon immersed in maps, looking for an unpublished trailhead and then snowshoeing up a mountain an hour and a half from home and sitting on a granite cliff looking out into white snow and cobalt blue sky, being totally alone and holding in my hand a logbook and a cache container.

it is a singular day; i am alone in it. and yet dozens of other people have sat on that exact spot with that very box and that logbook. we have all signed it. it's as if we all trace an invisible web on the surface of the planet and you can follow the patterns, the passages of people and things from place to place.

so i love to tell the story more than anything else. i am tickeled to death when somene i meet knows me from my logs; i like to be famous in this way, but not for the number of caches i've found (a lot; i don't know how many) or for the number of caches i have been first finder on (also a lot; it used to be i first found everything, along with crashco. at one point we started to feel the sport had gone out of it) i used to be able to solve the harder puzzles, and i liked being known for being smart, but now i can't solve the puzzles anymore.

today i was standing on top of belknap mountain, which was kind of a surprise to me in the first place; i had been going to visit belknap overlook, but for some reason i wasn't really paying attention and i went right where i shoulda gone left and had gone almost a quarter of a mile up the wrong trail and then thought: what the heck? i might as well go to the top and then over to the other cache.

so that puts me still over in the lakes region at about a quarter to three in the afternoon and i KNOW i have a 6:15 start at catamount and i would sooner DIE (ok, maybe a bad choice of words, considering the level of suicidality recently) ok, i would sooner eat (nevermind; there's not much i won't eat. ever eaten a grasshopper? they're nice and crunchy, and they have a nice nutty flavor.)

uh, anyway, i am not willing to miss a start at catamount. i'm just not. crashco and i have a pact wherein if one of us DIES on race day the other will drag him/her around the course in the "half lap dead guy division".

tuesdays i run number twelve; wednesdays i run 97. i have run this number now for nine consecutive years. i like it because it reminds me of the wreck of the old 97, and i feel like that some days.

i don't have a regular thursday number, even though i regularly race on thursdays.

so anyway, i was standing on the top of belknap mountain and all of a sudden i felt better. not "better", as in "i had a bellyache but then after a while i felt better", but BETTER, as in "i feel equal to the task of returning to work and maybe i'm all done with this".

hope is perhaps the scariest thing of all.

it was raining buckets and there was lightning when i left home on saturday morning. the forcast all weekend in the lakes region was for scattered thunderstorms, but i never saw one. until i got to exit 11 tonight and the sky opened up and of course it poured on the course, making everything all wet and real slick.

but i was running pretty good (for me) and having a talk with bob about the dangerousness of hope and suddenly around kilometer three i was thinking about haimar zubeldia, who rides for euskaltel-eusakadi. for no particular reason, i love euskaltel-euskadi. they're kind of the unofficial basque team in a world where teams are corporate rather than national. i love to watch when the tour goes through the basque region and the crowd goes nuts.

and there actually is a lot of team tactics in cycling. there's usually a main guy on the team and the others work for him. they wear out the guys on the other teams. if they can, a team will ride as a pack and draft off of each other. you'll see that in any breakaway, but when the guys sharing the work of pulling (that's the guy at the front of the paceline) are from different teams, they play a lot of psychological games, trying to pull out alone at the front at just the right time.

a paceline is a thing of beauty. you don't have to be a professional cyclist to enjoy one, but you do have to have some skills. all the riders line up very close, like with just a few inches from the back wheel of the front guy to the front wheel of the next guy.

there's this beautiful quiet spot real close in where you can hear the absence of wind resistance. that's what you want. it saves you something like 30% of your energy.

so you pull at the front for a while and then you kind of flick your elbow, which signals the guy sucking your wheel that you're coming off. then you drift back to the end of the line. if your line is long enough, by the time you reach the back, the next guy is already coming off, so there's a constant rotation. nobody pulls very long. you all go wicked fast.

you have to be real alert, though. if you screw up, it has the potential for a really BIG crash.

when crashco and i ride team time trial (our club only allows two to a team) i insist he wear a clean shirt. this is important.

watch the teams for guys who could be winning stages, but instead are working for the team leader. there's a name for this: domestique. there was actually a flap a couple of years ago where lance armstrong was seen on tv passing water bottles. the traditionalists were appallled. he was wearing the yellow jersey. domestiques pass water bottles. the tour leader does not domestique.

yet it is a badge of honor to be a good domestique: i love the story of king rené.
Posted by flask at 01:10

I recall you dragging me up a mountainside an hour and a half from home, in the snow. You were the strong one that night, let me tell you.

I wouldn't have had it any other way.

so glad you had a good, less rainy than forecast caching extravaganza.
thanks for the tour info. still learning here.
i would gladly dare the extreme danger of hope over the far riskier situation of having none, anyday. though hope that my mental illness is getting better or ever will is certainly not in my immediate future. it's a cloudy day today in the world of d.
your continued prayers are highly valued.
thanks.
peace-
d

Thanks for the info on caching...believe it or not, there are a bunch right here in bergen county NJ. Hope you are having a ball, and this chef that has eaten lamb testicles and sheep eyes has not had a cricket. Sounds kind of yummy!

What an interesting and amusing (in the beginning) tale you have to tell! So glad you had a good time and a good talk with Bob. His door is always open! You are doing better and managing the awful times in a better way. I'm so proud of you getting out there and doing your favorite things even though not perfect in your eyes, yet you are still doing your best. I am glad to learn that biking is a team sport and the how of it. I was totally unaware of the way the team works--just like the Canada geese fly in formation with leader dropping back and all taking turns in the lead. They are such lovely creatures. Library today so talk to you later.

Anonymous said...
This comment has been removed by a blog administrator.
2:23 PM