so i keep going out to play in my snow cave, and i keep being tired when i come inside. aside from all the belly crawling and hand digging, the mined snow has to be moved from the driveway and carried in. 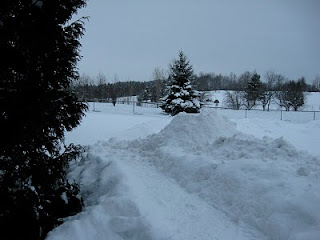 a fully loaded sled weighs about forty pounds, and today i moved twenty-eight sledloads. do the math; that's a half ton. i'm building a second dome out on the raised walkway, and it doesn't look very impressive, but it represents a LOT of pounds of snow carried in. each new horizontal foot of the raised walkway requires on average seven sledloads of snow to build.

this whole project is now large enough that my neighbors notice with some interest. or rather, the neighborhood children and men notice; the children stare and the men ask if they can come see it. the women seem to be aggressively disinterested.

i tell my neighbors when they ask that i'm thinking of putting in a barbecue pit and bocce court. they tell me i should string lights.

in terms of a workout, i am now taking "playing in the snow" more seriously.

the slideshow  still updates after each construction day.
Posted by flask at 18:29

Hi, it's a very great blog.
I could tell how much efforts you've taken on it.
Keep doing!