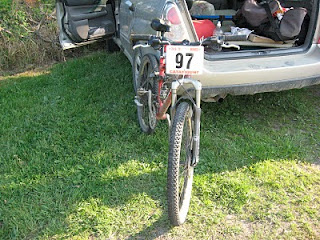 well, the times are in from last night.

i'll save you the trouble and tell you that this season i bumped up to the two-lap category, which was my race before i got sick and started sandbagging.

...except i guess it's really not sandbagging if you're, you know, too sick or too being out of shape from being sick to go the whole distance but you'd rather die than not take your start or even not make your finish, so you go out anyway in a shorter race.

at least that's what i did.

so i got out on the course last night entered in my proper division and it was maybe my slowest time EVER, but at least i was on the course. the wreck of the old 97.

there's only one way to get your conditioning back tough, and that's to take it by force.

so that's what i'm doing.

there was a little crisis yesterday afternoon; usually lucy sets aside my number so i can pick it up, but this year i showed up and they had just given it to someone else.


who is he? i asked. how much does he want for it? that last thing was silly, because i don't have the money to buy my number back.

but i know the guy, so i called him up and asked him if he'd trade, which you still can do before the opener, and he was willing, so i got my number. you know, the one i've had ever since my very first race?

today i'm packing my bags and tomorrow morning i'm going out on the road again.

this time it's a vacation. it was maybe going to be the end of peregrination, but last week i came in from that and my campsite's paid for, so i might as well go back out. the weather will be moderately nice and the area pretty and come church sunday i'll be among friends.

it's hard to beat that.

if you want to follow me, you can come along with this spiffy little number.
Posted by flask at 16:45