so i was doing what i always do, which is a lot of random stuff, and i saw this website that takes images and "textifies" them. simple enough. it's fun to play with, and you can configure it a little and save the image.

here's a photo i took, modified with textify it. 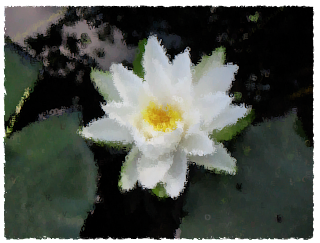 and then i saw to really astounding interactive art projects:

the first is an interactive film that uses google earth imagery and music video. you should run it in chrome, but it is so cool that it's worth firing up a second browser and shutting down everything else you're doing just to see it.

the other is the johnny cash project, which i might could describe, but you really should go see it for yourself. i am not kidding about this.

but yesterday i was listening to a radiolab podcast about talking to machines and heard about cleverbot. it's fairly astounding, and you can talk to it from here.


cleverbot is pretty far along in its learning, but if you want you can talk to a newer avatar called evie. she isn't trained as well, but every conversation you have helps her learn.

you may not wish to assist in developing artificial intelligence. it's interesting, though.

i had a very weird experience with her tonight in which she asked me my name. i told her i was called flask, which i am. and she said "hello, (my given name)". given what little i know about how her training works, that's a really bizarre coincidence, even if she did follow it up with asking me why people call me harper, which to my knowledge nobody has ever done.

that's it for me.

you can call me harper if you like. evie says she only did it because she's nice.
Posted by flask at 20:33

I like the textify'd image. 'way kool, as I believe they say. I'll just call you flask, if that's okay by you.

I love that wilderness downtown thing but had forgotten it. Going to go play now (and check out evie).