if you've been following along, you know i spent most of the month of may on the road. you may also know that i spent memorial day weekend in central new york, which is a place i like to be and when it came time to guess where i might touch down for the weekend and make reservations at a campground (try getting a free site or even a paid one on short notice), i guessed there.

of course i was wrong. i ended up in northern maine, but that gave me an opportunity to come home and tidy up a little and go out more leisurely, since i had reservations and everything.

and it was warm out there during the day. my ice held out and my cooler was cold except for a very brief period on monday, which is when the brand-new half gallon of milk curdled.

it did not go sour; it simply went largely solid, which was a little bit of a surprise to me, but i'm interested in this sort of thing and once kept a half gallon of milk unrefrigerated for many months and even moved it to a new home, finding a place to enjoy my "science experiment".

i guess if you have no real purpose and no real observations other than "huh. that's cool.", you can't really call it a science experiment. at some point my mom was tidying up here a few years ago and found it under the sink and threw it out.

i got that look that i assume moms everywhere give.

"it was a science experiment," i whined.

anyway, i had this brand-new jug of suddenly curdled milk and i didn't have the energy to dump it out so that it wouldn't clog the plumbing, so i just set it out on the porch figuring i could decide what to do with it later. 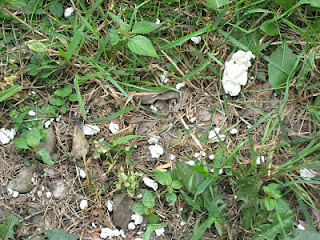 it sat there quite unremarkably until one day there was a loud POP and when i went out later i saw that the lid had blown off. it wasn't growing mold or anything, though, so i pretty much let it be and i have enjoyed watching its progress over the past several weeks as i go in and out of the house.

nothing to write home about; a lot of whitish clotty-looking stuff.

and then yesterday i went to put out some recycling and my whole front stoop was wet and smelled powerfully of expired cheese and there were bits of curd blown out on the lawn. 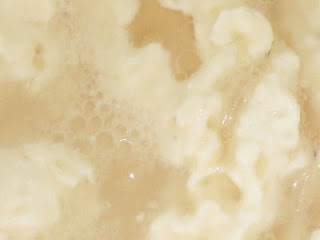 apparently it involved some fermentation and the thing had blown up quite spectacularly, jetting its water (whey?) out in some kind of geyser across the porch. i regret that i did not see the explosion, but i did manage to take pictures of the inside of the container, now once again peaceful.
Posted by flask at 13:59

I have concluded that you are nuts.