ok, so i'm going through the piles of stuff is started accumulating to tell you about later, and i'm kind of doing in in reverse chronological order at least as far as the pictures go. by the time i get around to last october, it will probably be next october, which will be fun.

both of you regular readers already know that i have a long-standing problem with foot pain. it has to do with a truckload of arthritis degeneration especially in my left foot, where i also have bone spurs in three of my metatarsal joints.

plus i'm carrying around some extra weight, which never improves that sort of situation.

last year i saw a podiatrist who suggested that he rig me up a storebought insole modified with a metatarsal pad because it would be cheaper than a custom orthotic.

surgery, he said, is also an option, though a temporary one, because bone spurs tend to grow back and although they can round off the chisel points on my metatarsals, they will only sharpen up again as the joint damage progresses.

ok, so we went with the cheap solution, and why not?

it did make an improvement, but what it did mostly was shift the pain to a different location, but it bought me some extra time on my feet before the pain set in.

and then i was in a parking lot after a race and we were talking with our friend doug about crashco's calf injury last summer and rehabilitation of same and doug had rather a lot to say about it in a way that suggested he spoke with authority.

"so what are you," i ask him. "an orthopedist?"
"no", he says. "i make prosthetics and orthotics for a living."

now we have been friends with doug for maybe thirteen years, but when i say "friends", we are more "parking lot friends". we see each other twice a week in summer and make chitchat about the weather or the course or whatever, but it's reasonable in this context that i might know a guy thirteen years and not know what he does for a living.

so then we get to talking about what doug could maybe do for me.

so finally last week i got myself into his office (orthoteknics) and he made me an orthotic. 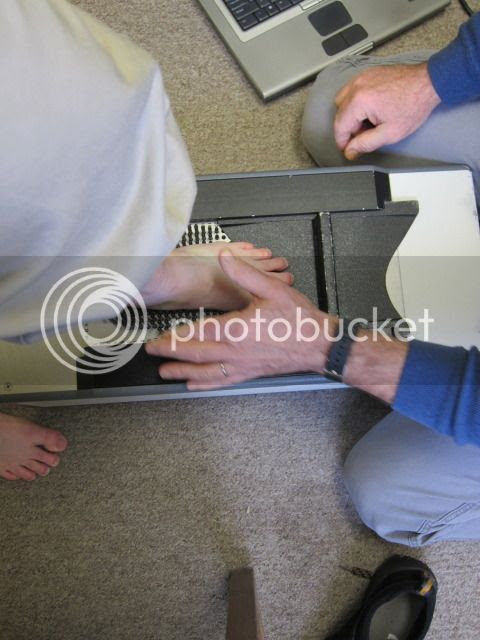 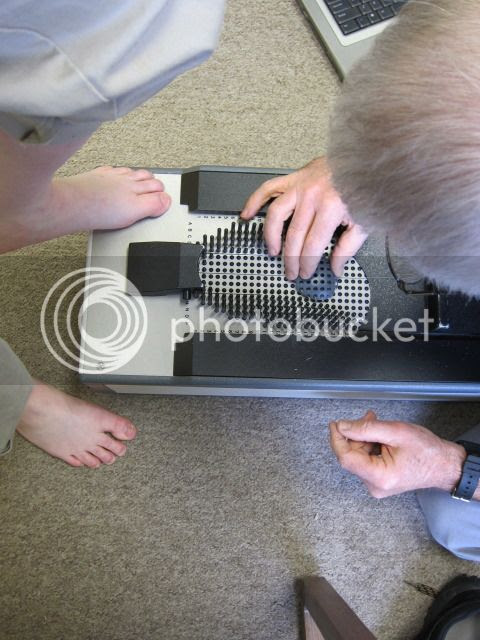 well, a pair of them. it is really interesting to run in them because they give my feet support that just hasn't been there for a long time and i am amazed to feel how i've been compensating over the years.

and doug was a good sport about it and let me take pictures. 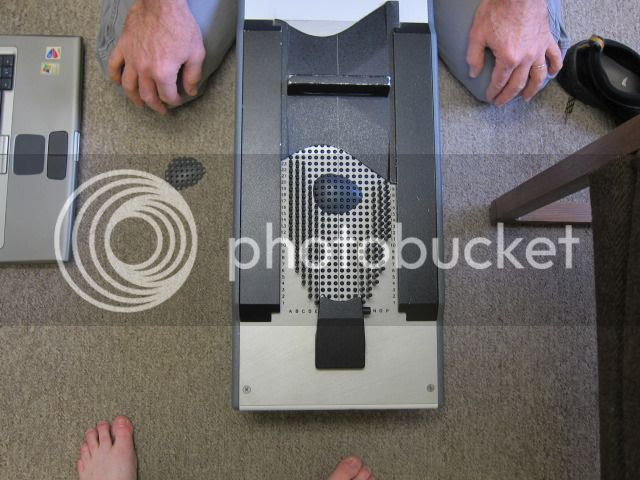 so he's got this cute machine with a grid of rubber pins like those contour toys with the metal pins in the plastic frame and you put your foot on it and the pins come up and there's a little form that fits over the pins to make the form of the metatarsal pad and then it sends all this information over to the computer and produces essentially a topographic map of your feet.

and you know how i love maps. 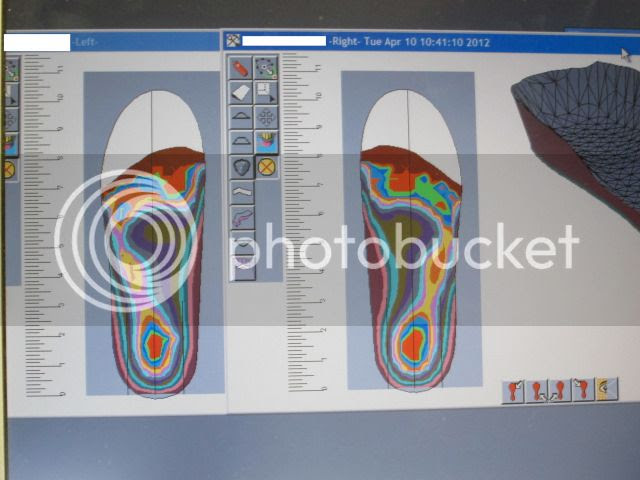 this is cool.
my hubby is suddenly dealing with foot pain. Delbiltating foot pain. His foot dr. has helped some but he is still dealing with a lot of pain. We may have to look into this.

Orthotics are wonderful, lifesaving, amazing. A good orthopedic's physician assistant is your best bet for a practical, non-surgical approach. Glad you got the right sort of answer.

Also, don't let a podiatrist do any surgery (if you get to that point.) Get a real orthopedic surgeon, specializing in feet. Podiatrists can take off bad toenails, and not much else. Really.

peg, yeah. it is amazing what foot pain can do to you.

and zhoen? i'm pretty sure the podiatrist knew what he was doing and wasn't proposing to do any surgery himself. i live in a town with a big teaching hospital (ok, two towns over...), so we have no shortage of actual orthopedic surgeons and although he did mention the possibility of surgery, he seemed pretty much to want to steer me not just toward the least invasive solution, but the least expensive one.

that gives me a fairly high level of confidence.