so we woke up in the morning at the hotel and they had a pretty good breakfast there, as far as hotel breakfasts go.

we had some time to kill before the opening of the museums, so we decided to head down into freeport because l.l. bean.

i have catalogue shopped bean, and i have driven through freeport, but i had never shopped at the mother ship.

so we went there.

the bean store, in case you do not know this, is open 24/7, 365 days a year, including christmas. i know this last bit because i had a friend in college whose family tradition at christmas was to pile everybody in the car somewhere in new hampshire and roadtrip to bean ON CHRISTMAS EVE, arriving early christmas morning.

i guess if you like sporting goods this is no more bizarre than going to church christmas eve and christmas day. it is family time together.

anyway, they have things at that store i didn't know i needed. 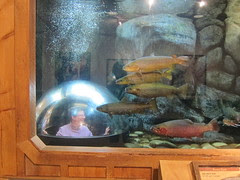 and they have brilliant marketing, at least to sporting people. the store is full of running water and fish ponds and even a big fish tank with popular game species and it has a little bubble on the underside designed for children so you can stand in there and look INTO the tank. i do not care if it's intended for children. it is cool and you should get in there.

and then we were wandering out of the store and they were set up for some kind of l.l. bean themed lawn games and i wanted to go over there and play because if you have a weird activity going on, i want to do it. there was a boot toss and a game where you try to get the knit frisbees into the iconic bean tote bag, and another game that involved running around some lobster pots with plush stuffed lobsters balanced on a canoe paddle.


let's just say that my natural failure to be athletic at all really shines through, even in silly lawn games.

so then we wandered downstreet to have a look at the giant globe in the delorme store.

the awesome thing about the delorme store is that besides that it has a huge three-story globe in the lobby, they sell a lot of maps and books about maps.

because oooh! look at these maps! oh, look! there's that book i loved when i was twelve and read it over and over! and ooh! little toys i love but don't need right here next to a precision navigation instrument i want!

in short, i am not able to just look at PART of this store like i can do at l.l. bean, where they have DEPARTMENTS. at the delorme store i have to walk around and look at EVERYTHING. i end up buying some stuff. 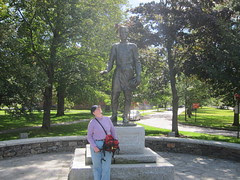 so then we headed back into brunswick because the number one thing we wanted to see there was the arctic exploration museum on the bowdoin campus, but we had some time to kill before it opened so we did a couple of geocaches and then we went to the museum and found it STILL not open and we were all indignant and everything and went to take a picture of the posted hours and found out that we were still forty minutes too early, so we went to the art museum.

it is not a large art museum, but its collection is kind of high-powered. they have portraits of thomas jefferson and james madison by gilbert stuart. you've seen gilbert stuart's work before. you know that portrait of george washington? the one on the dollar bill?

so then it was time to go to the arctic exploration museum. i'm interested in this sort of thing and i have read up on it, so when i was standing there in the lobby looking at one of the sledges that peary actually used on the expedition, i nearly cried to see it.

then we wandered downtown and went to slotcar junction, which from the writeups we expected to be a lot cooler.

along the way we had been asking people where to go for dinner, but brunswick is a town with no shortage of restaurants. i think before i told you that asking people to recommend ONE place is a lot like asking them to pick which of their kids they like best.

and it is so good you could DIE. there was so much good on the menu that we just turned it over to the server, who was both attentive and unobtrusive (a mark of really fine waitstaff) and she was also both knowledgeable and enthusiastic about the food.

she loves it, and she wanted us to love it too.

after asking us a few questions about what we like, she decided that we ought to start out with the vegetarian paté (crackers made on premises), followed by the pear and pecan salad. because i do not like green or blue veined cheeses, she recommended a substitution of a local hard cheese. we had the pan seared scallops (petite size, and plenty of food), which were not just perfect in their being lightly crunchy and caramelized on the seared side, but delicate and soft everywhere else. the rice and vegetables that came along with it were beautifully matched and the sauces both unobtrusive and delicious to the point that we wanted to eat each thing not touching anything else and then to eat each thing touching another thing to combine those flavors and then we wanted to eat all the things all touching everything because DIFFERENT AND DELICIOUS EVERY WAY!

and when we were done, the server came and said "blueberry pie?" and i am not a pie after dinner person, but the server said the pie had just walked in the door fresh made at four o'cock that afternoon and that it was very, very good.

it was a perfect match to our meal.

so yeah, you should go there.

you should go there if you have to drive many miles out of your way to do it.

you should go there if it uses up half of your dining budget for the week.

i am not kidding about this.

I Love This!
Sounds like a great time and the meal is making me hungry as you've been doing to me lately.
I'm dieting damn it!