a long time ago when i started geocaching, i heard about letterboxing and i thought that sounded cool, only when i went to their homepage, they actually had text on it that said "geocaching for smart people", which made me think i did not want to play with those boys and girls.

still, there's a geocache type that's a hybrid letterbox and includes a stamp, and the whole stamp in the book thing is the thing i thought was cool about letterboxes in the first place, so then some years ago when i had the opportunity in a craft program to carve a stamp i was all over it.

but then when i tested it, the stamp material threatened to crack, so i put it aside until some day when i found an appropriate backing for it.

cut to this morning, when i woke up at 0400 and decided suddenly that TODAY i should go find a letterbox, because it's on the vermont venture challenge.

(why yes, i DO link to it a lot. no, i am not a spokesperson for the challenge, nor for the state parks. but you know, when all is said and done i am having a really fun time and i'm going to come out of it with a pretty shiny thing that will be my pass to the state parks all next season, plus right about now the state parks are sitting on the top of my list of things i am happy my tax dollars are being spent on, PLUS day admission to a state park is only three dollars, so it's a right bargain on top of it.)

first i had to go find my stamp and then i had to rummage around to find some kind of material i could use as backing and mix up some epoxy and then i went back on the LbNA site and they seem to have gotten over their momentary snit about the new kids and gone back to being the more genteel older cousin, which suits them better anyway,  and i found a box very near my house and packed up all my stuff along with my brandy-new journal for collecting stamps in and i hit the road.

but flask, i hear you say. letterboxing?

yeah. an activity in which people go out and find hidden boxes by way of clues and they stamp their personal stamp in the logbook at the box and stamp the box's stamp in their book, thereby showing proof of finding and also collecting little prints.

this has been going on for hundreds of years, right under your nose.

this morning i went to one called "the florida dolphin visits the richmond round church" which, oddly, is located by the round church in richmond.

yes, that's a thing. go look it up for yourself.

here's a little picture of the logbook with my stamp and above it you can see the box's stamp. 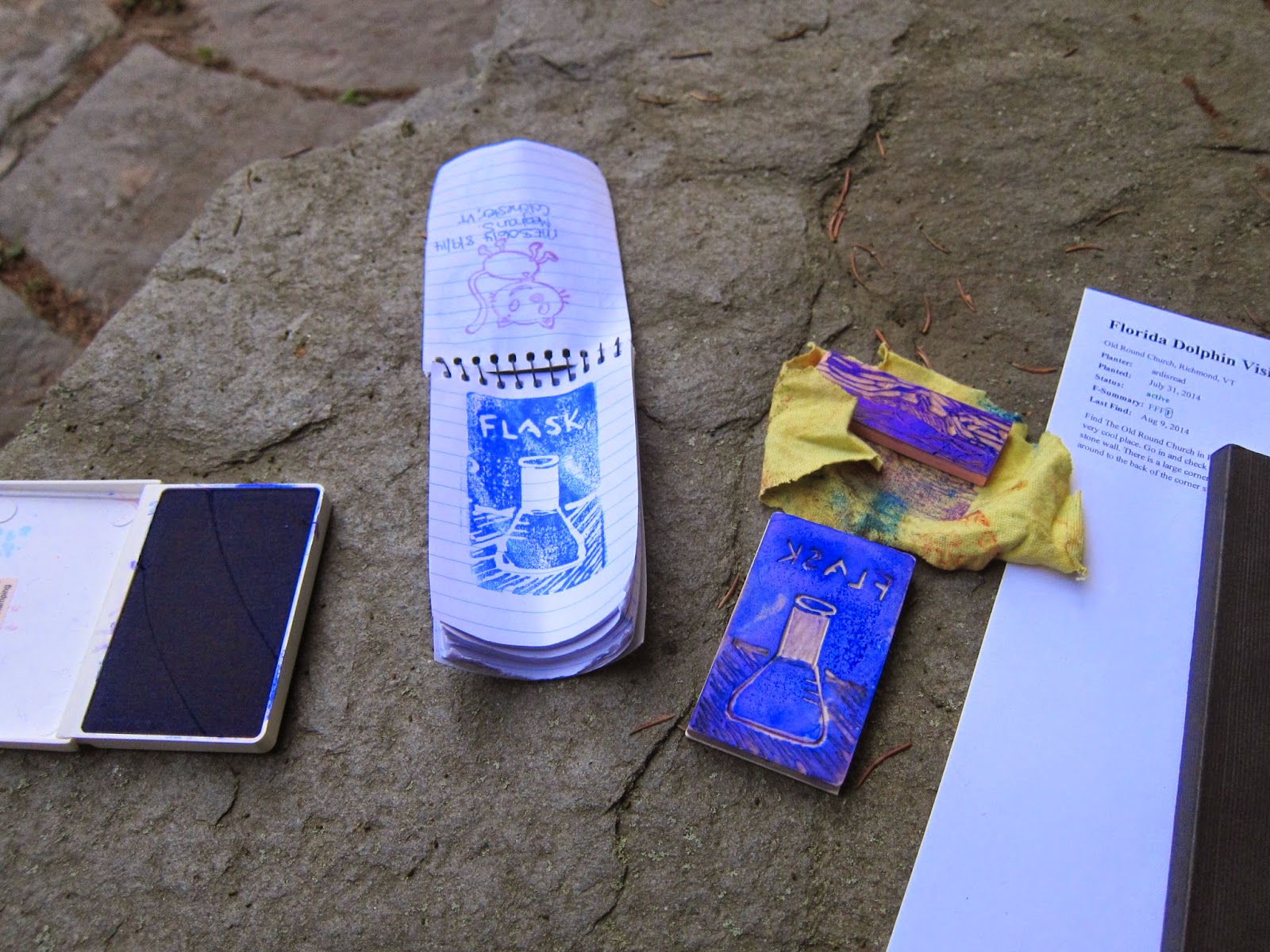