while i was out in winooski recently i saw the city's cute little code enforcement vehicle, which is one of four electric vehicles owned by the city of winooski. they are environmentally friendly and save the city a ton of money which is great, because winooski doesn't have a lot of it to throw around.

the city seal of winooski happens to be a bunch of ramps. i am only realizing that just now, because most sources say it's onions or leeks, which i am learning is generally what people who don't know what ramps are call them because they're kind of like those things but aren't either of them.

that picture is what ramps look like, though. no mistaking it.

anyway, "winooski" is an anglo approximation of the abenaki word for onion or leek (i'm going to bet you a nickle that the abenaki who originally lived here had no confusion over this plant.) and named this location after the (probably) ramps that grew in abundance on the hillsides and still do in some places.

the winooski river runs through winooski, and although a lot of things in winooski are named winooski this or winooski that, a great many things named for the river in other towns are called "onion river" something or other.


winooski remains the onion city, though, and they've incorporated that into some of the lovely details of their public spaces. 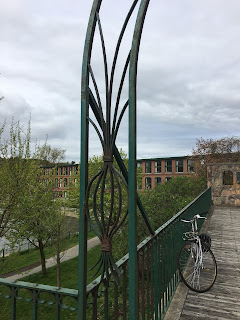