a few weeks ago i was on the campus of st. michael's college (ingress portals) and i had a look at a sculture there that i have seen before. it's one of those moments where you look at it in passing a lot and then all of a sudden decide to take a closer look and it becomes a whole other thing.

it's one o' them undulating sculptures made of field stone that you see from time to time- or at least i thought they were pretty common because there's even a house up in morristown that has one in the front yard...

but no. it turns out the artist, thea alvin, lives in morristown and she does these huge projects with volunteer help and they really are very lovely.

the one at st. mike's is called "time and again" and while it's worth looking at pictures, i notice that none of her works are fully photographed in her gallery, and i have to think you can't possibly capture them properly from one angle.

at least that's how i found it.

because i have engaged it as a pretty undulating shape on a lawn, with the surprised realization that it continues over there not physically connected but connected very obviously if your eye follows the curve of it, and most recently i noticed what could only be described as a round pucker hole at one end and i had some time so i went over and looked through it.

to my surprise and delight it forms a viewer to focus your gaze on a particular line that creates a lovely image incorporating the building behind the farthest part of the sculpture. 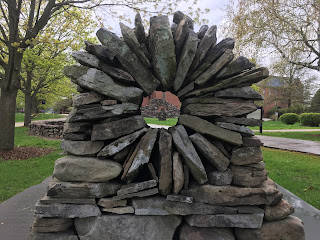 this is the view through the hole, which is more like a tunnel. 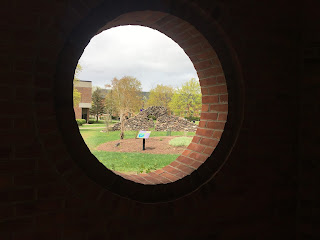 and this is the view from the building on the other side.

you should really go look for yourself if you can.