so after all this we marched into the first transition area where the race staff were happy to see us.

we had a short wardrobe change and put all our gear in the dry bags. i had spent a LOT of time in the weeks previous configuring and reconfiguring my gear for the different activities (yes, i know. race organization calls them "disciplines".) and i am really glad i invested all that time in knowing exactly where to put all the things and how to organize them while i'm switching over because if it hadn't been automatic at that point, it would have been way too confusing.

so we got our boat and we got it in the water.

i am not sure why we were pointed in the direction of the hardest possible way to put the boat in at that access instead of the nice easy slope, unless teams who were coming from the previous controls (which we had prudently cut) were approaching from that way and they wanted to keep the traffic flow uncomplicated.

we were pretty happy about this paddle because during our course sleuthing and practice, last monday we just happened to have paddled from this canoe access down to the cochran road access, which means we'd seen nearly all of this segment of the course and knew where to find the channel. 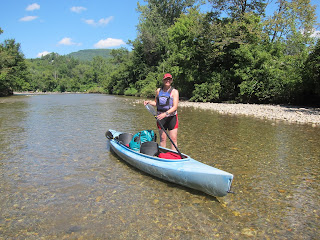 the nice people at the transition reminded us about the one checkpoint at which the teams might travel separately, the one up the huntington river, where one of you might stay with the boat and the other might wade upriver to the control.
by the time we got there, another team was already portaging their boat upriver, so of course all of that information evaporated from my head. it's not like they hadn't told both of us, and it's not like it wasn't in the printed "destructions" (as i kept calling them), but we missed that fine point entirely anyway.

so portage up the huntington river we did. 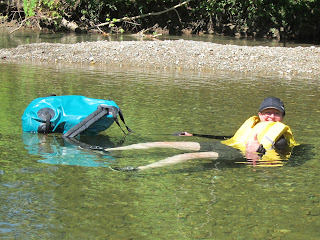 it's ok. it was one of the nicest parts of the day, and if barb had left me with the boat and gone herself, i only would have fallen asleep and then i'd have been all groggy and cranky.

this way, i was able to pause and have a little chat with some interested passers-by while barb got the bag. they were lovely people, and curious as to why we were so oddly outfitted and what we were carrying in our packs and i explained for them some of the other bizarre appearances they had seen as the day progressed.

they were still a little mystified as to why we would do such a thing.

and it is, too. you can go up on a mountain and you can plan for yourself a stupid crazy day of bizarre tests of skill, but if you know where everything is going to be, it is more of a drill and less of an adventure.

there is a particular pleasure in answering the question "where are you going?" with "we don't know."

there was fog in the morning and sunshine in the afternoon and we saw a bald eagle perched in a tree.

a word about the boat: these are rental boats, which is nice, because it means we don't have to lug our own boats around with us, but the old adage applies:

if you're the rental company, you want the boats to be able to withstand the rigors of what joe public might do to them, and sustainable at a price joe public is willing to pay to use the boats.

short version: this is the heaviest boat i have ever carried.

we get to the second transition area where we reconfigure our gear for bike travel, which is the thing we're actually good at. we are happy to pay our dollar to get water and lemonade at the lemonade stand. we could have had cookies and other goodies, but i simply wasn't in the mood.

i just wanted to put on dry clean socks and ride my bike.

i am awkward and uncomfortable on foot but on a bike i feel strong and graceful. by this point in the day, though, we look at the clock and realize that all we have time for is to simply ride from the transition up to the finish. we have no time for checkpoint 14 or any of the other bike points, except for number 20, which we know ahead of time is right on that bridge where the geocache is.

geocache? how did that come into it?

oh. well, august 17 is international geocaching day, in the middle of international geocaching month and i am trying to meet the geocache challenge of a cache a day for the entire month and a twelve hour adventure race in which i am forbidden to have a GPS is no excuse NOT to find a cache, so i have busted my butt course sleuthing partly to figure out which geocaches might be right on the racecourse and which might be findable without a GPS and i have settled on this one particular cache that's on this one section of trail that i'm 90% certain is on the course.

if for some reason i get skunked on that, it's going to mean i have to leave the race venue when we're done and go find one of the backups.

but who wants to do that?

so actually one of the first things i check as soon as we get the maps is DOES THE COURSE GO OVER THIS CACHE? 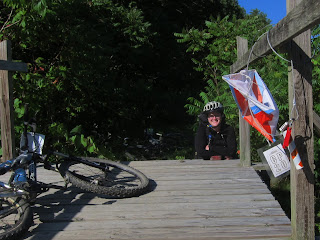 so it is a double triumph for me. i have found my cache for the day, and i am on my bike, heading home on a trail and a road i know well and have ridden before.

we are too exhausted to even notice checkpoint 21 when we pass it, too intent on what we know is going to be a brutal, unpleasant climb up governor chittenden road.

we know it is going to hurt, but we also know we can do it, so it is a triumph.

we are the second to last team to finish, so there are a lot of people hanging around enjoying hors d'oeuvres and the ovation that rises up catches me quite by surprise and i am crying.

the guy in the tent, he asks me if i'm ok and i repeat that old sports saying: bleeding, sweating, crying: if you're not doing two of those, you're not trying hard enough.

and i point out that since i am not bleeding, it is fitting for me to cry.

in the tent we notice that nobody cares at this party how bad you smell. in the tent we learn that other, more experienced teams have made some of the same mistakes we made. we learn that one hardcore guy showed up to the race with broken toes. and we learned that while on the course one guy broke a finger and got it straightened by a teammate.

dinner is good and the company is good and it turns out that barb and i win a prize because (we learn suddenly) there is an unofficial contest at this race for the team name that laurie yager likes best.

our prize is a big box of delicious cookies.

later on i will tell you about the awesomeness of this race and its culture, but for now i have cookies to eat.

This post proves that personal victory is sweet. Literally. Thank you for sharing your journey--before, during, and after--the Bitter Pill.