short track and the wrap up 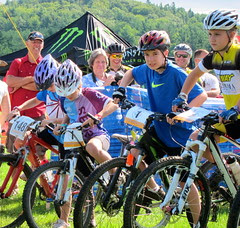 the catamount classic pro XCT weekend is over.

i am whipped. i worked hard, but not a fraction of the hard some people worked on that thing.

it was a very good weekend to be lea davison, who won big in both saturday's and sunday's races. she managed to pull this off a short two weeks after winning big at the national championships, and that is a lot of big. 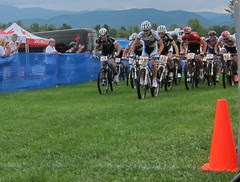 she also got to do this here, on her home course, with her family and friends and well-wishers to see it, and her fan base includes a whole big pack of little girls and for sheer noise and energy at bicycle races, i think a pack of little girls can go head to head with a crowd of drunk germans any day. 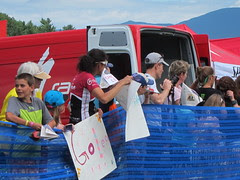 during her races you didn't really need the announcers to tell you where lea was on the course since the roar of cheering followed her wherever she was. 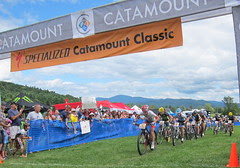 if you're a cycling fan, you already know who was there and don't need me to explain it. for the rest of you, i will tell you that there were current and former national champions (US and other countries), former world champions, champions in other disciplines (cross country mountain biking is only one of many bicycle disciplines), up-and-comers, local kids, and the regular guys who show up every wednesday night.

corporate sponsors fuel the prize pool, but unlike a lot of sports where you go to see the elite levels of competition, there is a small-d democratic attitude in which it is less about star quality and more about shared experience. 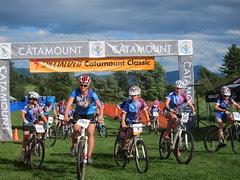 we can ride the same courses as our mountainbike heroes, on the same day they ride them. we cannot go as fast or as long or launch those jumps with the same confidence, but we can all of us get on our bikes and ride until our legs blow up, until we are sweaty and our souls ache.

a young girl happened to say yesterday that a part of the course was hard, punishingly hard.

and a professional rider turned to her and said it was brutal. two days ago i stood, jaw dropped, while mary mcconneloug volunteered the information that she was frightened by some of the jumps in the course. you know, the same bits that frighten me and the other middle aged ladies.

try to imagine another sport in which such a conversation might take place.

try to imagine a group of little girls and middle aged guys going out into, say, fenway park after an important ballgame and playing a little pickup game.

or just wandering out onto a world cup ski course after a race.

so anyway, it was a lovely weekend.