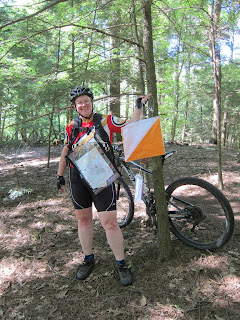 so i got an email from the race management over at GMARA asking me if i'd be willing to go retrieve some of the flags and buoys left over from the bitter pill.

and of course i was so pleased with their organization and their race that i said i'd be delighted to help before i really processed the whole request: flags and BUOYS.

flags? total fun. they are right near bike trails that i habitually ride for entertainment.

the buoys? not so much. while they are, to be fair, right near bike trails that i habitually ride for entertainment, they are anchored out in some NASTY ponds.

i am accustomed to wading into water that's, um, richly organic in its smell, but stepping into this first pond was a stretch even for me. my plan was simply to whip off my shirt (who wants to ruin a good shirt?) and dash out past the weeds and then just swim on the surface to the buoy because one thing i learned as a kid is that if the bottom is really nasty, you can swim even in shallow water and stay clear of the unpleasantness.

but the bottom of this pond - which by the way is a man made pond built by the army corps of engineers to serve as wildlife habitat, a purpose which is fulfills really, really well- the bottom of this pond is so teeming with critters and egg masses and assorted plants that even if you try to be swimming in the top layer of it and not disturb the bottom, the bottom comes right up and messes with you anyway, so you're better off taking your chances with walking on the bottom.

you have less exposure that way.


and i had been told that the buoy was anchored with a ten pound dumbbell so i TOTALLY knew what to expect, but i have an extreme fear of invisible submerged objects. i used to call it an unexplained phobia, but then one day i was telling some friends about it and my mother was there and she said it's not unexplained after all; when i was two i happened to be at the public pool one day when a boy got his hand caught in a bottom drain and drowned. 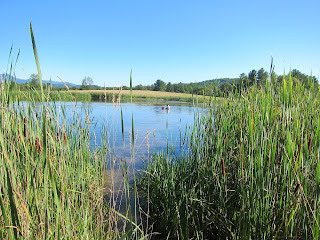 so apparently it's not a phobia, because it is a fear reaction to an unremembered traumatic event and not an irrational fear. that's what a friend of mine who's in the business at teaching psychology at a prestigious university tells me.

when you get right down to it, it does not matter one bit in the moment if your fear is a true phobia or not.

and i pulled on the rope to collect the buoy and -it was attached to an unseen submerged thing!!!!! 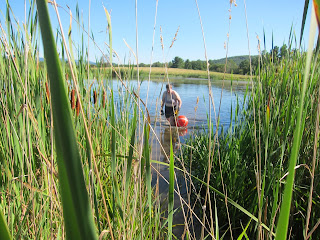 it did not matter one tiny bit that i KNEW what it was attached to, what the thing looked like, and who had put it there. panic still set in.

my internal detached observer noticed this happening and was vaguely amused, which is probably the only thing that allowed me to keep pulling the rope until the unseen submerged thing, covered in weeds, was pulled into sight and i could carry it to shore.

the worst part of it, though, was that the worst of the pond smell was now in my skin. even with the pond clothes removed, the nausea-inducing stink of it stayed with me.

and, like, it's totally ok with me to be near a stinky thing and maybe even IN a stinky thing, but when there's no respite from the stinky thing even out in clear air, THAT'S where it starts to bother me.

see? i learn stuff about myself every day.
Posted by flask at 08:55