i am never going to be a food blogger

granted, i write a lot about food and even take pictures of some of my food, but i'm never going to be a food blogger.

those people take way too many pictures of delicious food arranged JUST SO. do those people ever eat? have time to do anything? 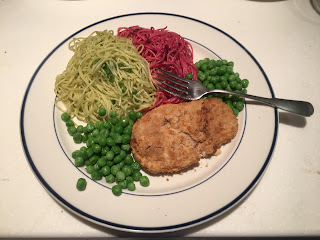 the other night i made a reasonable dinner, but because pasta with green pesto and pasta with red pesto on one plate would look pretty, i fancied it up a little. the cutlet is one of them quorn things, which i find moderately delicious. the peas are frozen peas, but the pasta is done in beet pesto and ramp pesto and they are delicious, if dish intensive.

normally when i'm putting pesto on pasta i just mix it all up in the dish i'm going to eat it from.

but since i wanted two colors on my plate i had to mix them in two separate dishes and then put them on my plate and i had envisioned some sort of yin-yang thing because that would look cool but seriously, i'm a single person eating dinner alone at four in the afternoon and who has time for all that?

it was a pretty experiment and nice to have the two flavors of pesto (delicious even) but more work than i think i'd go to unless i had company and wanted to REALLY DRAW ATTENTION to the two different pestos.

also if you're serving more people than just yourself, it feels less stupid to dirty an additional two dishes for the pasta.
Posted by flask at 06:00

look at you all fancy. normally we are seeing camping fare. :-)

i know, right? plates and everything.